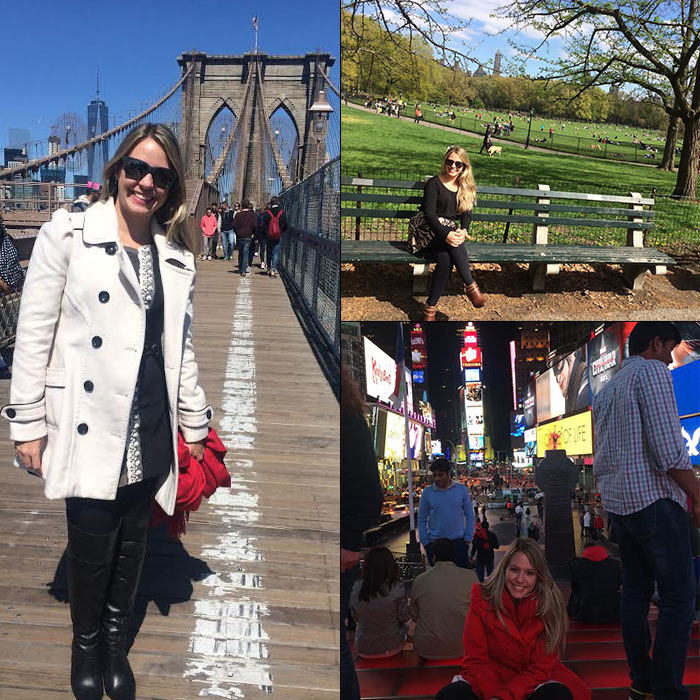 It was beautiful, it was inspiring, fun and wonderful follow all these testimonials of people who traveled alone to New York. Today, I finish this post series with the fourth and final part of the testimonials. Again, I want to thank everyone who participated – and also those who wanted to contribute after I had reached a satisfactory number of stories. I say again: I hope that all these posts may have inspired you to not give up a trip for not having company! If you have not seen the other posts, just click here. 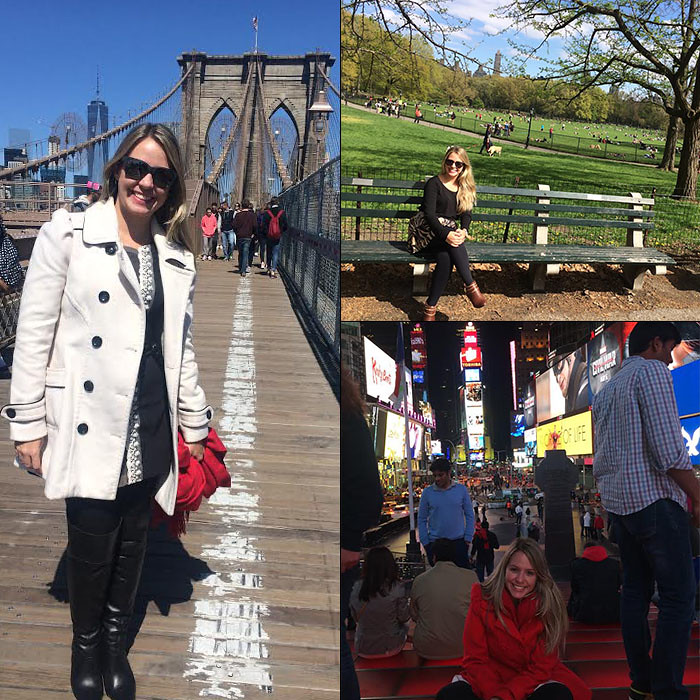 Maura Richard, 26 years old. Belo Horizonte- MG, she works in the business market. She stayed in a hotel.

“New York has always been a dream: every time I watched a movie that was in the city I promised myself I would visit that place! And I think that it was destiny, because I won the trip from the company where I work! At first, I thought it was kind of crazy, because I don’t speak English and just a little Spanish. But this was what most motivated me, that would be several adventures together: travel alone, knowing the US and visiting New York without speaking English. I ended up making friends. In the first flight, from Belo Horizonte to São Paulo, I met an American from Miami and she invited me to go to the VIP room, where we exchanged several tips from NY and BH. On the first day in New York, I was looking to get on the Top of The Rock, I entered the building and tried to ask the guard where it was. The man I spoke to did not understand Portuguese or Spanish, however, a young woman asked if I had understood and I thought, wait a minute, you speak Portuguese, you’re from Brazil ?,She was from Jacarei, SP, and she was with two Cuban that work with her in Dallas. We went to  the observation deck and took great pictures. Then, they invited me to go with them to Cirque du Soleil in Paramour, we watched the show together and eat the traditional hot dog. I loved the invitation because I was alone all day, basically without talking and loved to practice some Spanish with the Cubans and meet Carol! I learned a lot traveling alone, I learned to trust my intuition and my taste.

What advice would give to anyone who is thinking about traveling alone to New York?  Do not travel without an itinerary. As New York has numerous sights and even walk through the city is a great adventure, the script helps to save time to know where to go, where to take nice pictures, what to eat, what to do. My itinerary was essential for my trip to be perfect!

What is the coolest part of traveling alone?  Traveling alone is amazing,: you literally do what you love to do. For example, I woke up at 6:30 am, I had coffee in my time and get out to do what I wanted. At 8am, I was already walking through the streets of New York! It is best to not have to expect anything from no one, to not worry about anything, eat whatever you want and if you want …

A must-do program for those traveling alone to New York is… crossing Brooklyn Bridge! The walk on the bridge was amazing, I would repeat if I had time. And ice cream trucks those who play songs. 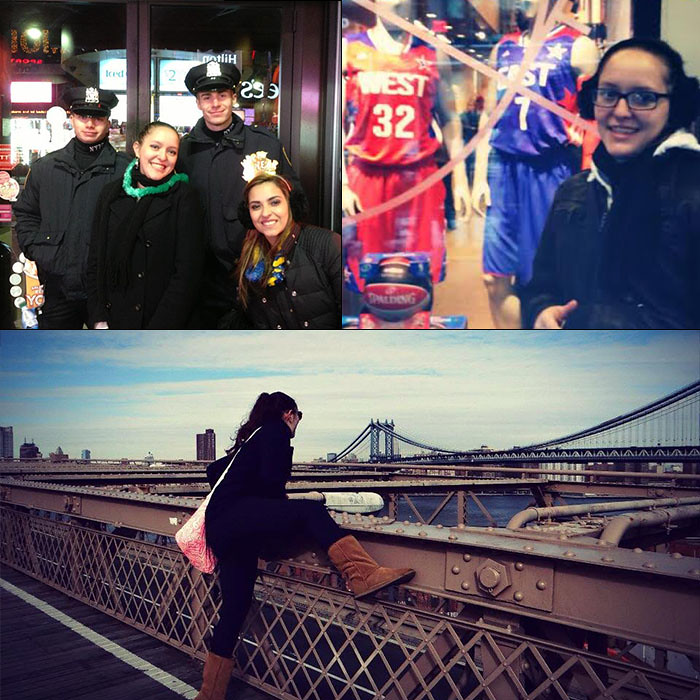 Paula Montagner, 23 years old, São Paulo/SP, advertising. She was in a student accommodation.

“I wanted to have the experience of discovering New York by myself, without the influence of any other person. I always wanted to see / live in New York and wanted to do an interchange to improve my English. I was there from December 7th  (2012) until February 17 th (2013). I intend to work with events / fashion / wedding, so, my tastes are more specific. The idea of traveling alone pleased me because, that way, I could go to the places that I have interest instead of just knowing the most famous sights. I intend to return: all my plans are meant to live in NY. I don’t know if it would be alone or with someone. I am very attached to my mother and I would love to go to NY with her (to show the city or to live there). Another very important person to me was the friend I met while I was studying  and we were planning how our lives would be in NY. As a Kaplan student, I was in student accommodation at the New Yorker Hotel. With this experience, I learned to do things by my own. I realized that I can control the money I had to spend, organize my studies, combining students and social life. As I live with my mother, I think I was just used to and, spending some time alone, I realized that when I need I can do everything. Moreover, this experience allowed me to decide on my future, I realized that I really want to work with fashion and / or marriages in NY. “

What advice would give to anyone who is thinking about traveling alone to New York? You must have good communication. It is essential to be able to communicate with everyone, or to request information, directions or just to chat.

What is the coolest part of traveling alone?  Being free to do whatever you want.

And what is the most annoying part?  Feeling alone.

A must-do program for those traveling alone to New York is… I think this is very personal, but two essential things to me were sitting in the middle of Times Square and keep watching the movement, people. It seems that in the midst of so many people I could be at peace. And talk to the largest number of store employees / restaurants as possible. I always went in the same cafeterias and restaurants. And I ended up helping the attendants. I think this experience with local people was essential! 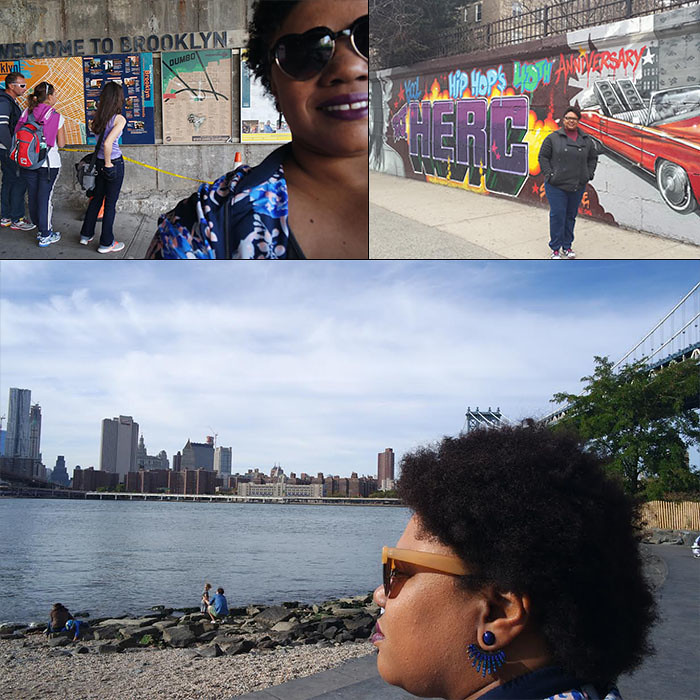 “I had been in New York twice, accompanied, but I always thought I needed more time in that city, I always have the impression that something was missing still, and that feeling has not passed. Since I was a kid, I always wanted to visit New York, I do not know if it was because of so many movies that we spend our lives watching, whether it is due to the fashion shows (which I love) or something from past life … I say this because when I first arrived, my hotel was one block from Times Square, and after having placed the bags in the room, I went and stood on the corner and I had the feeling that I knew everything, that it was not a place strange, that was part of me. It was a feeling I had never felt elsewhere, and the days that followed were all like that. I walked on the streets and I passed by the people as if it all was something of my daily life. My trip alone to New York happened when I was on vacation in Toronto for 20 days, but the longing for New York was so great that from there I took a bus low cost faced 12-hour trip each way and 12-hour trip back. I don’t know how to explain my joy to see the bus coming in that city! I spent four days alone, walking and observing every detail. Traveling together is good when companies are nice, but traveling alone makes you learn a lot of things. You do not have someone to share the trouble and have to make decisions sometimes fast and alone. It makes you realize how strong you are in times of trouble and can have a time of his own and take time to know yourself better. “

What advice would give to anyone who is thinking about traveling alone to New York? Take a risk, lose yourself searching addresses, subway lines, you will learn with everything. You’ll see you are much stronger than you think and you will come back with your soul modified  forever, it is an unparalleled experience!

What is the coolest part of traveling alone? Spending hours lost in the streets, and ends up finding things that you would never see if you had not been lost!

And what is the most annoying part? Get sick while you are traveling is one of the worst things that can happen to you. Therefore, I advise everyone to take the medications for the trip because if you have to find something in the city’s drugstores is crazy.

A must-do program for those traveling alone to New York is…  Metropolitan Museum and Central Park. Metropolitan because it is one of the most beautiful museums I have ever seen. And Central Park is for you to have some time to yourself in the midst of the metropolis, see the kids running through the park, people walking, each with a different style.