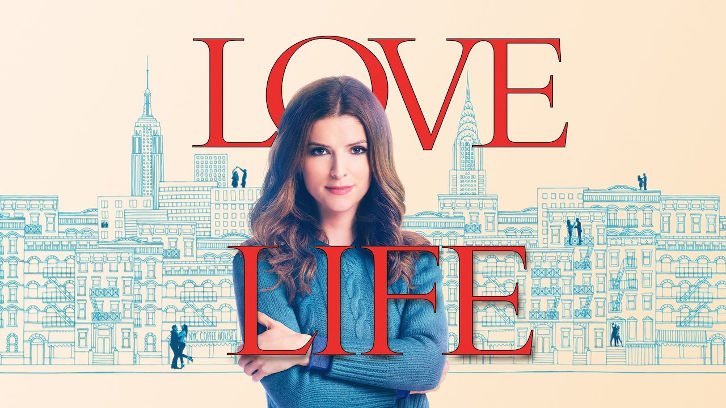 I’m that kind of person obsessed with series and movies that are set in New York City. It is funny to notice that before I lived here I didn’t have that feeling – I have watched Girls and Sex and the City when I was still living in Brazil, but the fact that they were set in New York was not what attracted me, but the plot, cast, and the fame. After I moved here, that feeling changed and the fact that a series or film was set in the city is enough to make us (my husband and I) feel like watching. Obviously, it was no different with Love Life, a series that debuted less than a month ago on HBO Max, HBO’s new streaming service. We finished watching all the episodes of the first season and I enjoyed it so much that I couldn’t help but share my impressions about it!

Anna Kendrick stars in a fresh take on a romantic comedy anthology series about the journey from first love to lasting love, and how the people we’re with along the way make us into who we are when we finally end up with someone forever. Darby lives in New York city and her journey is presented in 10 episodes (35 minutes each, on average). If I had to explain Love Life briefly, I would say that the series is a mix between Sex and the City and Girls (both from HBO too).

Why I loved Love Life

It’s all happening for Darby✨ Love Life comes to @hbomax May 27. #LoveLifeonMax

1. It’s a more realistic picture of life in NYC – Darby’s love journey – her pains and joys – are the central focus of the show, but life at the Big Apple is also part of the story. Obviously, the scenes of beautiful and charming places in the city bring that inspiring feeling, but, in addition to these takes, the series also brings a portrait of a much more real New York routine, very different from Sex and the City, for example. Darby is not presented to us as a powerful and successful woman, who lives alone in her dream apartment. Through the 10 episodes, we follow the evolution of her love life, as well as the struggles of living in the city. At the beginning of the series, we meet a Darby who shares an apartment with friends – a very realistic apartment, by the way – and she doesn’t have a glamorous job. Darby works in the art field (museums and galleries), but the path she takes to be successful in her career and get where she wants to go is long. Not to mention other small daily realities that are presented throughout the episodes: from carrying your Ikea furniture or a Christmas tree bought on the street to the difficulty of taking the subway with a stroller, passing through the arrogance of a character who wants to use someone’s immigration status as a threat. These are subtle scenes, which enter as mere details, but they bring more reality to the plot. Even when she goes to live alone, her apartment, a rent-stabilized studio, is very consistent with the reality of the city. I also loved the fact that one of Darby’s best friends is lesbian and black – with New York being such a free city and a leader in movements against homophobia, I think the presence of such a character is significant and necessary. Still, it is worth adding the whole scenario about dating in New York.

You have to close one chapter to start the next ❤️ #LoveLifeonMax

2. Everyone will relate to some of Darby’s insecurities – Darby is a little bit of that cliché – which is not really that cliché: a young woman who dreams about finding her true love. However, throughout her love life, we also know her insecurities about the guys she dates during her life. From the rejection of that popular guy who looked perfect when you are a teenager to the rich and successful guy who makes her often see herself as inferior and feel that she needs to lie about who she is to fit into his circle of friends. How interesting it is to observe from the outside and recognize some behaviors that I have had in my dating past. It is impossible to watch and not come to the conclusion that the people in our lives need to add up and that when we need to find justifications to keep that guy (or that girl) in our life, something is not right. You don’t have to settle for someone just to not be alone and the show shows you this.

3. We need to talk about toxic relationships – with so many people on the internet talking about self-knowledge and self-esteem, the topic of the toxic relationships has also got more attention as well. I consider this debate to be super necessary since many people think that aggression is limited to physical violence, and verbal violence can be just as harmful. The series brings an example of this with great mastery. It’s very interesting and uncomfortable, to be honest, to watch Darby in a relationship like this and how much she cancels out herself because of a guy who is more concerned with him than with her. He is a person who cannot be happy for her achievements and becomes a burden in her life, sucking much more than adding up. At the same time, we also realize how difficult it can be to identify this type of behavior, as it is often directly linked to a lack of self-esteem.

Surround yourself with friends who have your back ❤️ #LoveLifeonMax

4. It’s not just about Darby’s relationships with the guys – the main focus of the show ends up being Darby’s love life, but other important relationships in her life also stand out. One of them is the friendship with Sara, her best friend and roommate, whose stable and “perfect” relationship with her boyfriend also ends up getting some attention on the series. Sara has a different energy than Darby; she has a free and party soul, which at the bottom also hides insecurities. It is very beautiful to see the friendship and partnership between the two, a very true relationship, where Sara recognizes Darby’s vulnerabilities and vibrates with her with each achievement. We also come to know some of Sara’s problems and we also see how much Darby cares about her friend – however, we also realize how exhausting it is to want to help people who don’t want to be helped. It is beautiful to see the path that their friendship takes and how much people are not always part of our lives in the same way or with the same intensity always. In addition to Sara, another relationship that gains focus on the show is that of Darby with his mother, Claudia, who has narcissistic behavior. I also found this approach extremely necessary, since it seems most of the people don’t ever question the relationship the parents.

5. More important than finding someone to love, is loving yourself – yes, I know how cliched that phrase sounds, but it’s the truth. Darby’s love experiences – and her brief visit to the therapist – show us her maturation process. As time goes by, it becomes clear how much Darby becomes more confident and is able to realize what is not good for her. More than that, she realizes that a person can be wonderful and still not be a fit for you. Another very cool approach of the show is that despite showing several guys in her life until she meets “the person”, we realize that it is much more about her, about her maturation process, about how much she evolves and about how important is this love relationship that we need to create with ourselves. In seeking the love of her life, Darby discovers how important is she in the equation: whether it be in relationships with guys, with mom, or with her best friend. I don’t need to accept what doesn’t do me good and doesn’t add up to me.

Did you like it? The second season has been confirmed as well!

Did you like this topic? See my other suggestions:

The Bold Tybe – from Freform, it has 4 seasons. The story was inspired by the life of the editor in chief of Cosmopolitan magazine, Joanna Coles and features three single friends – Jane, Sutton and Kat – that work at Scarlet magazine. The coolest part of the series is that it portrays many of the issues we are experiencing today: the boom of social media, feminism, racism and, of course, the pains and delights of living in New York. Jane is a writer for the magazine, Kat is the director of social media and Sutton is the last of the three to serve as an assistant, even though she always works until she is exhausted. The three work under the direction of the editor in chief Jacqueline, who runs the magazine with mastery – she is a different boss from the others. The Bold Type is ta show full of attitude! Here in the USA, you can watch it on Hulu and Amazon Video.

Dating Around – Netflix reality show with six episodes focused on the dating world. The first season takes place in NYC. On each episode, we follow 5 datings of a single person in the city. The mission is to find the person who will be worthy of a second date. It is very interesting to not only understand the dynamics of flirting, especially in NYC, but also to observe people’s behavior in these situations. The second season already premiered and brings couples from New Orleans.