I had been at Friedmans, but it was only after I was there for the third time that I finally convinced myself that I should recommend the place for you guys. After all, when a restaurant deserves a second and a third visit in New York – a city with hundreds of options in the gastronomy – I think it also deserves the recommendation, right? Friedmans is the type of restaurant that goes well for any occasion: lunch, dinner or brunch. The menu has delicious choices, the prices are ok and there are a few locations scattered throughout the city. Want more convenience than that?

The first time we have been there with a couple of friends. That’s when my friend and I realized that we had been there before, with another friend! And the funniest thing is that I suggested Friedmans for this dinner because I had seen a friend’s tip on Instagram – I was dying to try the Falafel Burger she showed. But anyway, we were still there for lunch last week and then I concluded that I needed to share this tip here.

The original store opened in 2009 in the Chelsea Market. One of the pioneers Vanessa had been diagnosed with celiac disease and had to eat gluten-free. So when the first location opened she was vocal about making it a gluten-free safe haven for her and her celiac peers. She was adamant that there be only one menu available which would be entirely gluten-free. After long hours in the kitchen and playing with all different sorts of flours we believe we have created some of the best pancakes, waffles, and fried chicken. Today, 99% of the menu can be prepared gluten-free.

The menu is very traditional American, with several sandwich options – classics like pastrami and grilled cheese, prices from $14 – and burgers – made with beef, lamb, turkey, chicken and falafel – from $15 . There are also salads – from $16 and also well traditional American dishes such as the classic Fried Chicken & Waffle $ 25 and several egg dishes – those available at a brunch time – from $16. 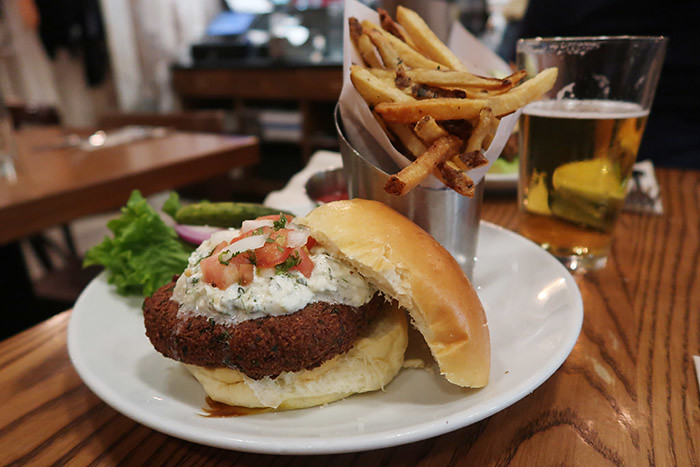 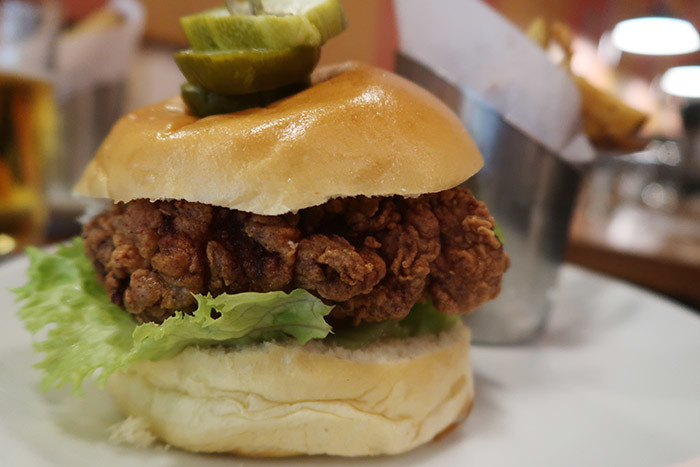 The last two times I’ve been there, I ordered Falafel Burger ($ 16), which is also a great option for vegetarians. Falafel is made from chickpeas, and this burger is breaded, that is, it has a crunchy crust, plus a yogurt-based sauce. It is served with tomato, cucumber, and lettuce, plus a generous portion of fries. I have no words to explain how much I love this burger. Thiago ended up choosing the Buttermilk Chicken and Bacon burger ($17), with fried chicken and also with fries. According to him, it was sensational. We were there on a Sunday, brunch day, and the typical egg dishes were also beautifully presented!