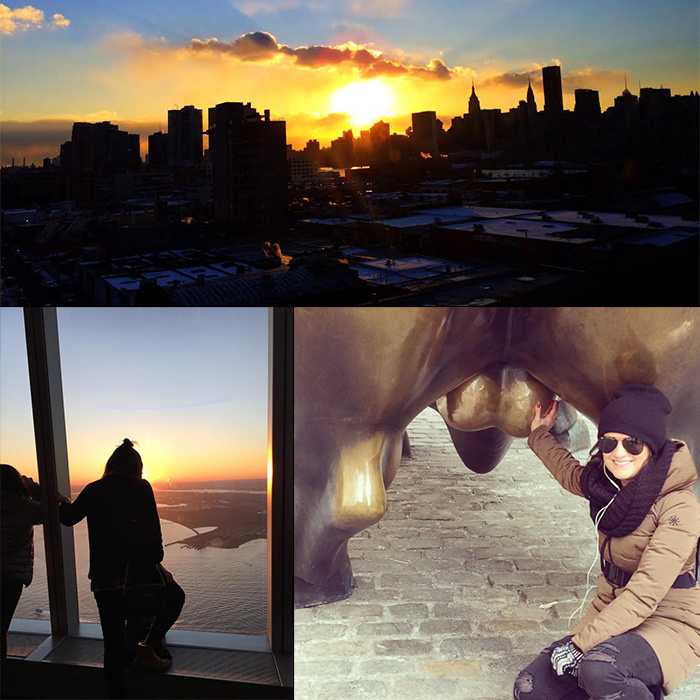 This posts series  is good, right? For those who by chance doesn’t know, two weeks ago I started to publish testimonials from people who have traveled alone to New York. The goal is to share cool stories, from people that came here to have fun or studying, and found out that you don’t need to be afraid and you can travel alone! In the end, I hope that these stories inspire everyone to do the same and never give up on traveling for not having company. 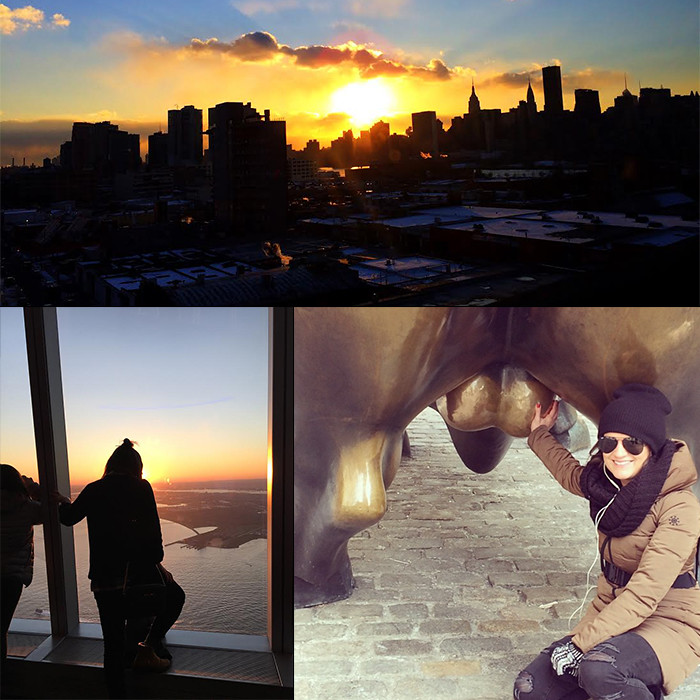 “I’ve been three times in New York, alone. At the time, my friends could not join me, but I bought the ticket thinking about traveling alone. I used to access American Airlines website, I checked the promotions with earning points and choose the best date. My trips were always for fun and if I had an opportunity to go again and alone, I would go again! I’m always stay in a hotel. I am a member of a website that, every ten nights, you get 1 free, so I end up opting for this option to be more advantageous than any other. In my first trip alone to the city, coincidentally I met two friends on the plane and we were together most of the time, going to restaurants, bars, tours. The other times, I met several people in pubs and restaurants. My biggest learning was to realize that I can turn on my own without the help of anyone. “

What advice would give to anyone who is thinking about traveling alone to New York?  GO! AND IF YOU HAVE FEAR … GO ANYWAY !. New York has so many things to offer that I did not feel alone at any time.

What is the coolest part of traveling alone?  Get in all stores, with no one to bother me, lol. Wake up super early or too late. Make things easy on your time, make all the decisions.

And what is the most annoying part? Carrying your luggage and the costs may be higher as well.

A must-do program for those traveling alone to New York is…  I love Financial Distric area, which each year is more modern and full of new attractions. I love to walk through the narrow streets, have a coffee there, take a peek at Century 21, touch the bull (as they say good luck financially, why not, right?), having lunch at Le District, in the Brookfield Place. Finally, be sure to watch the sunsnet at Battery Park or from above the One World Observatory. All that you do in the same region and walking. 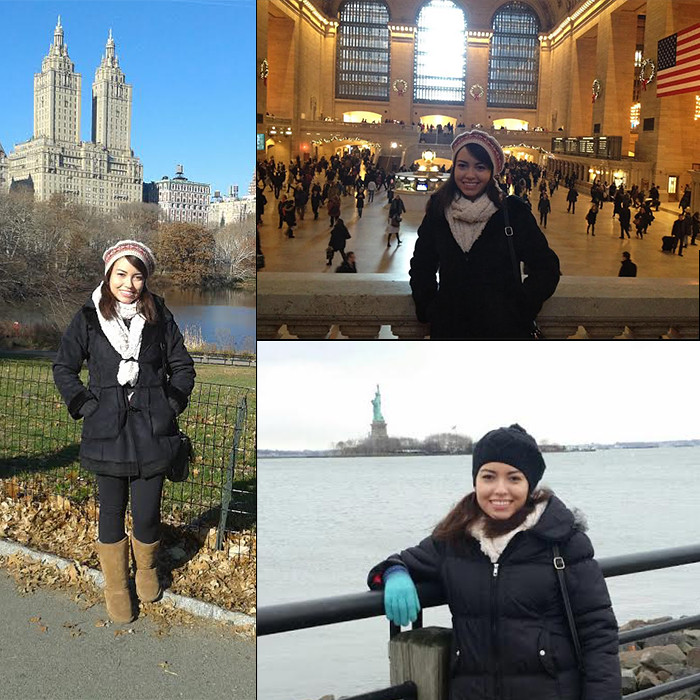 “Everything started in July 2014. My cousin, who lives in Port Vincent (Louisiana), came to Brazil to visit family and she stayed a few days at my house. We were talking and she invited me to visit her at the end of the year and I was super excited about the idea! I had the passport, as I traveled to Lisbon a few years before, so I had to just get a US visa. While researching the price of tickets, I remembered a cousin of mine who lives in Newark and I no longer seen him for about 12 years. So I decided to extend my trip that would be only 10 days to 24 days, so I could spend time with them. New York has always been a dream, so when I had the opportunity, I took! I was a little afraid, because I never spent so much time away from my family, but it was even more amazing opportunity than I imagined. I was staying at my cousin’s house. Despite being in Newark, it was the most viable option, because I did not spend money on hotel and I could still see him and meet his wife and children. I decided to travel alone because my parents and my brother could not travel with me at the time, and dollar was starting to increase. I traveled for fun, but I intend to return after college (I study Fashion Design at UFMG) to make some course. My biggest learning was to find that I can turn me well alone. Despite having been in my cousin’s house, he and his wife worked almost every day, so I was alone out on the town and managed to do quite a lot. Several people were impressed when I told them that I walked there alone and I got not lost in the subway any time haha.”

What advice would give to anyone who is thinking about traveling alone to New York?  Don’t do last-minute things. Always have some clothes in your handbag and download the World Mate app. During my trip, I took several different flights and some of them ended up delaying or being canceled. The app was wonderful, as always warns time changes, boarding gate, etc. Also, warns the time of check-in for flights and hotel. It is a very complete app that helps a lot to organize the trip.

What is the coolest part of traveling alone? Being able to do whatever you want and whenever you want. Normally, when we travel with other people we have to reach an agreement, and sometimes we have to give up some things we want to do so that others also have their turn.

And what is the most annoying part?  Find several things / amazing places that remind us of different people and not being able to share this moment with them. It’s a little bad to take pictures too.

A must-do program for those traveling alone to New York is… not only for those traveling alone, but I recommend to anyone visiting Top of the Rock. I went in winter, around 4:30 pm. As at the time it got dark early, I could see the sky still light, the sunset, and the dark sky. One of the most amazing views of the entire trip. It was beautiful to see the buildings starting to get enlightened! 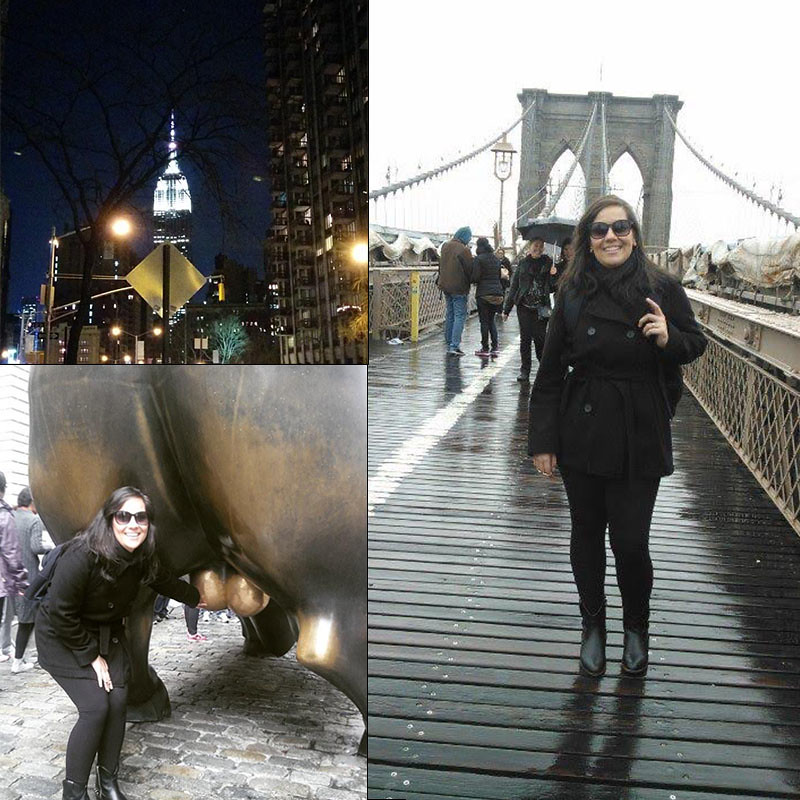 “I always wanted to visit New York, I was always hearing about the diversity of the city. When I began to watchGossip Girl, the desire to know the city only grew, because the series is set in various locations, not only in Manhattan. I traveled alone because it had been avoid the trip a few times due to unavailability of my friends. In 2013, I plucked up courage and went, rented a room in an apartment of a Brazilian and spent 10 days. The second time, in 2014, I was in a hostel. I want to go more often, but not alone, because hosting is very expensive, unfortunately. I made many friends. In 2013, I met people who were in the same apartment and eventually we went out together. I also met a guy that was in New Jersey and we saw each other several times. I met people on the subway, in bars, and I even met a guy from Miami and we dated. In 2014, I stayed a week in his house in Miami, and then I left to spend 6 days in New York and I met, in the hostel bathroom, a Brazilian who became my friend. Last year I spent the carnival at her house in Recife. These experiences have taught me that it is much better not to follow a perfect itinerary. In New York, sometimes you just don’t  turn in the right street you end up finding a wonderful place you would not think of going. I learned to allow myself, even though I am very communicative, I lost fear about speaking English with American. “

What advice would give to anyone who is thinking about traveling alone to New York? Enjoy a lot!

What is the coolest part of traveling alone? This chance to meet new people and new places, not worrying about time or itineraries.

And what is the most annoying part? Not having anyone to share something fun or event a big meal.

A must-do program for those traveling alone to New York is… sitting at Bryant Park, order a glass of wine and look everything. 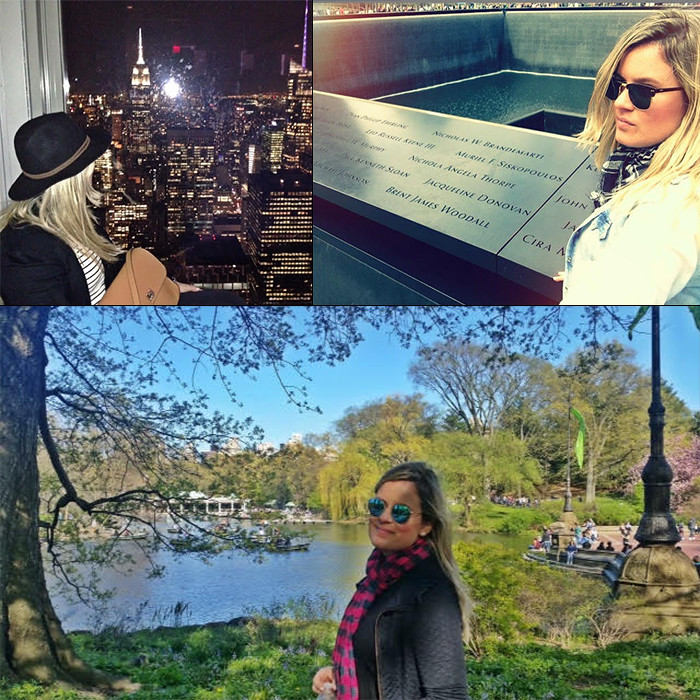 “I was planning to travel with 2 friends. I found a very good price for the holiday and I bought the ticket. It turned out that they could not go with me and I went anyway, I had already purchased the ticket. I stayed at Leo House hotel. I chose this hotel using Booking. What motivated me was the good location and the good reviews, considering that I was traveling alone without knowing anyone and had just some days. I ended up making friends too, with the person I bought Broadway tickets. She is Brazilian and lives in New York for over 20 years, her name is Rosangela Sabino. We agree to meet each other at Rockfeller to get my tickets, I showed my organized itinerary, handwritten. She thought that was great (Facebook groups helped me a lot!) and she did a tour with me Saturday … it was great! I confess that I was a little afraid to go alone, I did not know the city .. But New York is wonderful! So much things to do and to see. It’s worth! The city does not stop and have so much to offer. My English is not the best, I understand when reading, but I was still insecure about talking, but it all worked out! I asked a lot of information in the subway and people were nice with me … “

What advice would give to anyone who is thinking about traveling alone to New York? Don’t give up for being afraid or for not having company. The city never stops, is charming, it is everything we see in the movies and TV series.

What is the coolest part of traveling alone? I think that, after this trip, I will go to any place alone, I am not afraid. You realize that you don’t need anyone to travel to a place that you want to visit. You just have to go, I am sure that it will be an amazing experience.

And what is the most annoying part? Sometimes, you want somebody to take a picture… but I always asked and I have amazing pics!

A must-do program for those traveling alone to New York is…  wow, there are a lot! I have to go to Central Park, see a Broadway play, visiting MoMa (I was amazed by the arts that I saw there), crossing Brooklyn Bridge, Times Square. I know that some things are cliche, but there is no way to be different. 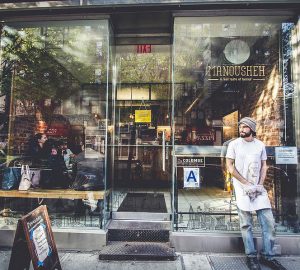 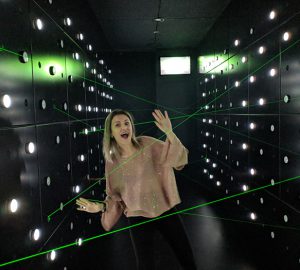 SPYSCAPE in New York City: a place dedicated to espionage 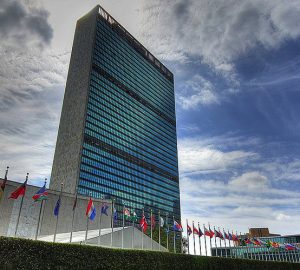