Sleep No More – the intriguing immersive theater in New York 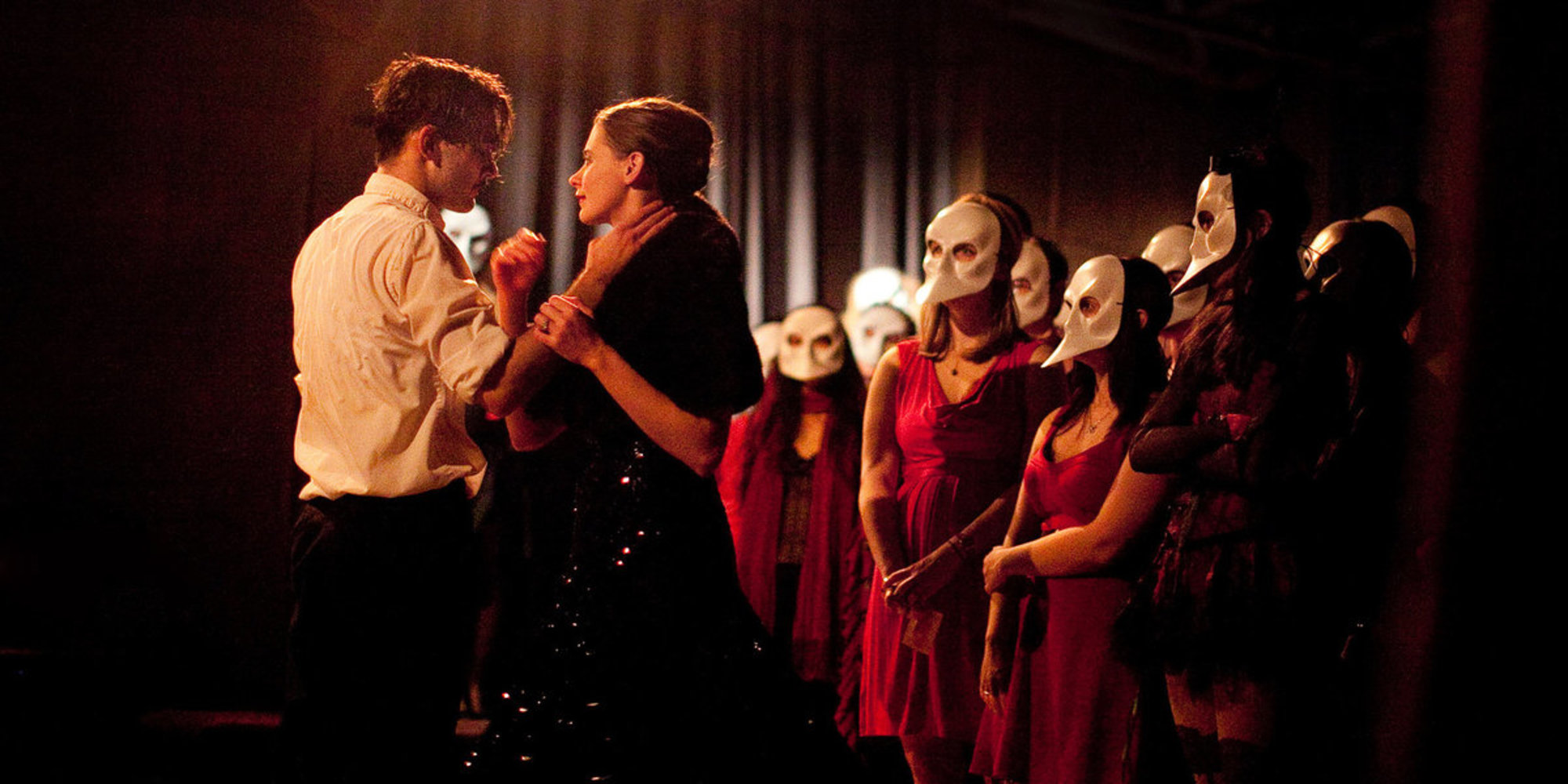 Since I moved to New York, I’ve heard of Sleep No More. I’ve read the reviews, listened to opinions, but never bought tickets to check out. It was a lack of planning in this respect, I confess. It’s kind of a thing that I think happens to a lot of people who live here – I have plenty of time to go (but they never go). But, finally, a few weeks ago, I took some time, researched dates, and bought the tickets for Thiago and I. And here I am to talk about this experience that is, at least, great. 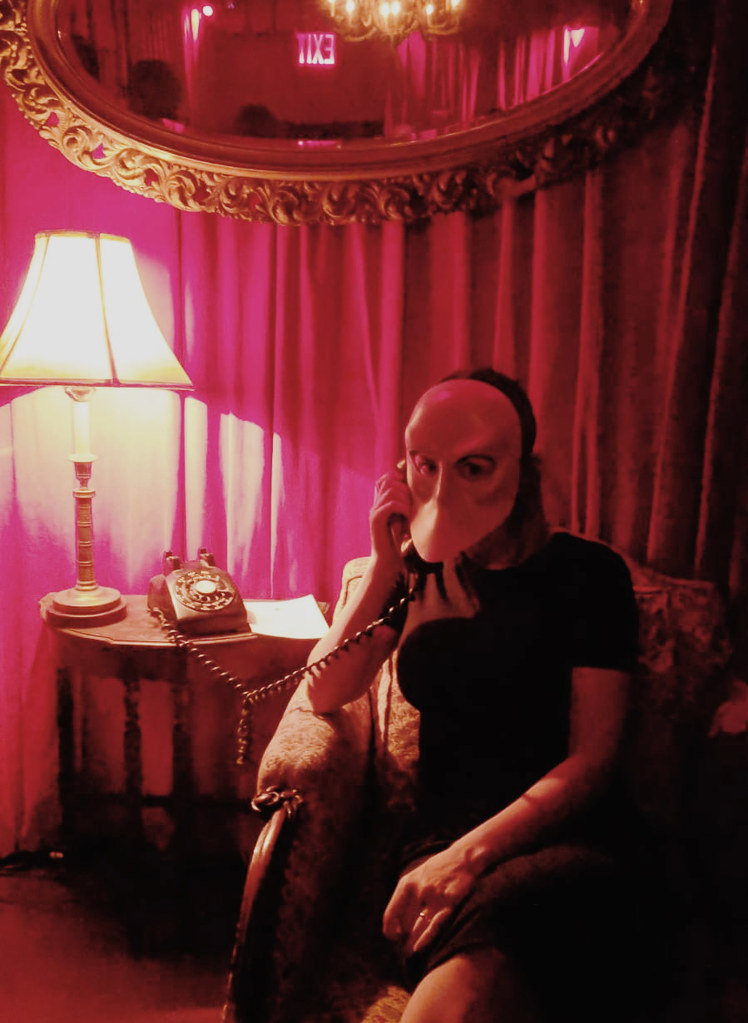 I think that the great thing about Sleep No More’s is that you do not know exactly what to expect. I knew it was a play inspired by Shakespeare’s Macbeth. I also knew that everything is set at The McKittrick Hotel, a building that is actually a lot of warehouses. In 2011, Emursive and Punchdrunk, two theater companies, came together to produce Sleep No More, which was probably the most original theatrical experience in New York history. Another fact that I knew is that it was an immersive experience and, by immersion, what I knew was that you followed the actors. I also knew that the public needed to wear masks during the performance and that it was necessary to wear comfortable clothes and shoes. And my friends told me: do not try to stay with Thiago, stay apart. Okay. That was all I knew about Sleep No More.

Well, if you are reading in this post and you do not even know what Sleep No More is about, let’s get a brief explanation. It’s an immersive play. Do not expect a stage with an audience. You are free to walk independently and follow the cast members as you wish. Each actor tells his own story, with other actors telling stories interconnected simultaneously in other rooms and other floors. You can not watch everything, that is, each experience will be unique.

We arrived at The McKittrick Hotel, which is at Chelsea, at 7 pm sharp, and we have already seen a long queue. It took about 10 minutes before we got in, and while we waited, a security man checked everyone’s ID. No one under the age of 18 is permitted unless accompanied by a parent or legal guardian. (children under 13 are not admitted). Upon entering, I had to leave my bag in the luggage check – it is not optional, you can not get in with bags and backpacks – and the fee is $ 4. After that, we went to check in. Yes, as it is a hotel, you do check in. For you to have an idea, there are no physical or digital tickets for Sleep No More. When you make the purchase, your name goes to the hotel list. After we identified, we received a deck of cards each and heard a “Good luck!”.

After that, I’ll tell you a bit about how everything works and my impressions. No spoilers, but if you want to continue not knowing what to expect, I suggest jumping to the last paragraph.

We walked through some dark corridors and I was a little scary – but, first of all, I want to make it clear that it is that good fear, the unknown, not knowing what to expect. Everything revolves around a suspense. There is a staff and they wear black masks. But they do not say anything, just point it out if you ask any questions. Well, we arrived in a bar – you can have something to drink – and there you will find some of the hotel guests. Women and men well dressed and even interact with you – but as characters themselves, not as actors. And that is where your playing card makes sense since groups are formed according to the number of your cards. Thiago had the playing card of number 8 and I had the playing card of number 9 and, as you can see, we followed the advice of the friends and we were separated (we had no choice since we received different playing cards).

When my number was called, I entered with another group through a door and received my mask. There, we were told not to take them out and not to shoot anything. Besides, silence would be primordial and mandatory from that moment on. No talking, no whispers, no reaction. Another reminder they did was that there is no right or wrong way to keep up with the experience. “Follow your instincts,” they said. And that’s how I did it. We entered a group of more than 20 people in a long dark elevator. On each floor, the guy let only one part of the group leave. I was last with two more people. And I was super excited already exploring.

The whole play takes place in five floors of the building and, for you to have an idea, there are about 100 scenarios and environments, and a cast with more than 20 people. Obviously, I had no idea of these numbers before my experience – and I only knew about it when searching to write this post. There is no dialogue – another fact that I did not know and which I found interesting since it democratizes the experience for those who do not speak the language. On the other hand, there is a strong musical track with perfect synchrony with everything that happens in the scenes. The details in each scenario are simply incredible – and nothing is by chance. Everything helps to understand the story. I have often seen people exploring the scenarios alone, reading notes and opening drawers. The scenarios are very dark and represent indoor and outdoor locations.

left to right, what passes from day to night? #sleepnomorenyc #mckittrickhotel

My strategy was to follow my wishes. I would meet a character, waited to see what would happen and follow him or her. When the group that was following that character became very big or I saw or heard something that caught my attention, I changed my path. I was even contemplated with a one-a-one scene. A girl from history pulled me into the room, said some things to me, and gave me an amulet to protect me. This is normal. The actors approach someone from the audience, whisper in his ear, kiss his hand. With Thiago also happened, otherwise, with another character. Yes, it was a little scary, but all I did at that moment was to realize that I was watching a play and that it was not expected – nor recommended – that I respond. So it’s ok.

Over the course of the guests’ three-hour evening, each character plays a one-hour loop, returning to their initial location at the close of every hour, repeated roughly three times. Some characters are more stationary in their loops, while others are very active across multiple floors of the building. And don’t worry: when the three-hour period comes to an end, the cast and staff somehow wind up leading everyone to the bar from the start.

Did I understand the whole plot in the end? No. Did that make me like it less? No way.Sleep No More is an experience and, for me, being so close to the actors, watching the flawless acting, the timing of the soundtrack and the lights and how the characters met as the play continued, was the most incredible part of all. I felt inside the story, like a detective trying to figure out what was going on and unraveling mysteries. The adrenaline I felt, the excitement of walking through the scenery, the unknown, not knowing what was waiting for me, all this made me love my experience at Sleep No More. Go open-minded and enjoy!

Buy tickets for Sleep No More