How is the weather in New York?

One of the things that people always asked me – whether here on the blog, on the Facebook group, Instragram, Snapchat, on YouTube or by email – it’s about the weather in New York. People always want to know about the temperatures here and what to wear. I realize that many of them are scared about the winter. But the truth is that I am not a meteorologist, and even if I were, let’s remember that Mother Nature does whatever she wants. However, there are some facts that help you to understand the weather here and plan your trip. 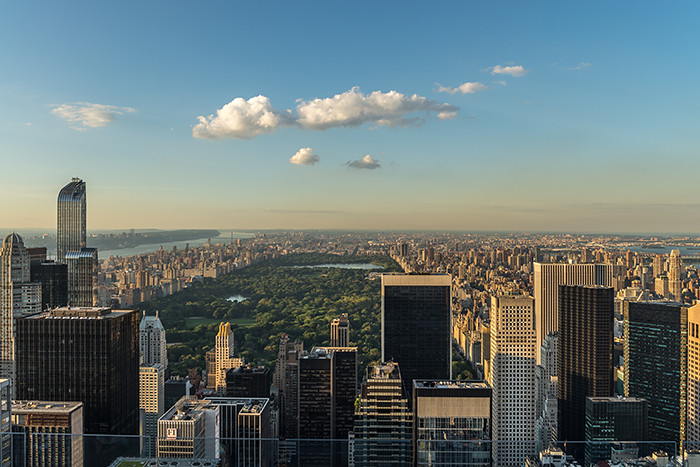 Check the period of each season –  this is a basic geography’s concept, but let’s remember. The seasons in the Northern Hemisphere are opposite to seasons in the Southern Hemisphere. Translation: when it is winter in Southern Hemisphere, it’s summer here. Simple, right? If you know the period of the seasons where you live, then you know the seasons here. This means that winter is from December 21th to March 20th, the spring is from March 21th to June 20th, the summer is from June 21th to September 22th and fall is from September 23th to December 20th.

You have to know that the seasons are well defined – ok, you already know the period of the seasons and you also know that is how it works everywhere in the world. You know that each season has a peculiarity – but you also know that not all the seasons are well defined in all cities. In some parts of Brazil, for example, winter hardly exists. Well, it does not happen in New York – here, every season is very well defined. This means that winter is super cold and the summer is hot. That is, no need to bring coats in June, okay? And the fall and spring marks the mid-season period, with warm and cold days, but never extreme, and with magnificent landscapes. Many flowers in the spring and brown and red landscape during fall. 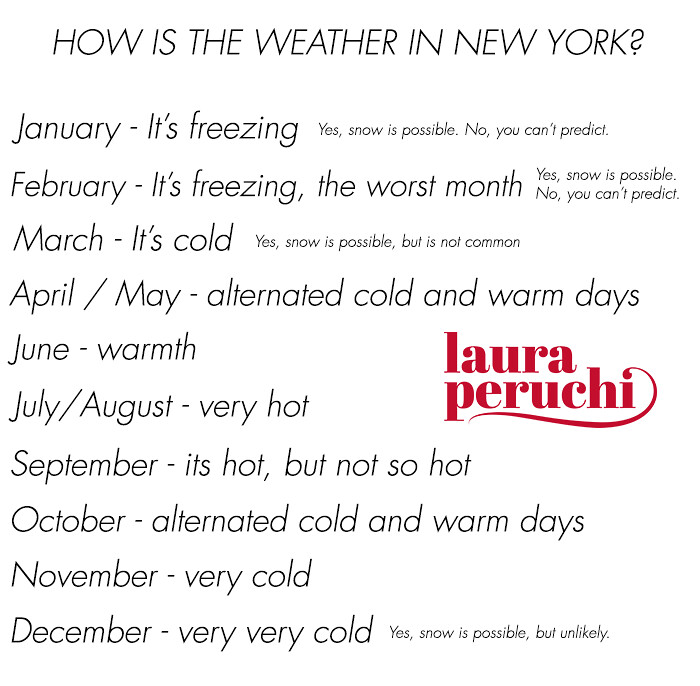 Weather apps are your best friends – I confess I don’t like when people ask me how is the weather here, because this question is easily answered by opening a weather app – I suggest Yahoo Weather and Weather Channel – or even searching on Google. I check an app every time that I will leave my house. They not only show the temperature, hour by hour, as the Real Feel temperature, wind and humidity, plus the time that the sun rises and sets. All in real time. If you are coming here, download an app: you can check the weather situation in all cities of the world. Check the season of your trip and also check the picture above, which gives an idea of how is the weather month by month. Don’t worry about what to bring months before the trip: luggage is something you begin to plan a few days before leaving, always checking the forecast – that shows the weather for the next 10 days.

Deciding what time to visit the city is something very personal – people always ask which is the best time to visit New York. Well, in my opinion, the best time is between May and late October. If it is between the end of May and the end of September, great, because then you enjoy things like Coney Island, Governor’s Island, the ability to do more things outdoors as picnics and rooftops, etc. But again, this is my opinion. There are those who dream to see snow, for example, or enjoy the magical atmosphere of Christmas. New York is a city with well-defined seasons, remember, again. And this is wonderful, because every season shows a different city. And in any season, you will enjoy. You may not be able to make a picnic in Central Park in January – but you will be able to ice skating. And the great part of the city is the diversity of things to do.

Finally, I pick several pictures of outfits that I wore during these more than two and a half years living here. As you can see, the seasons are really well defined – just notice my clothes every month. Do you want to know another great exercise to help to choose outfits? Open your Instagram, go in search, places, enter a place of New York (may be Central Park, Times Square, Empire State) and see the photos taken there, checking the date. You will have an idea of how is the weather in the city by the outfits of people.

Also, check out this post, with tips of how to dress during winter. You can also click here and check out some outfits for summer.