George Washington Bridge – and a Lighthouse in New York City 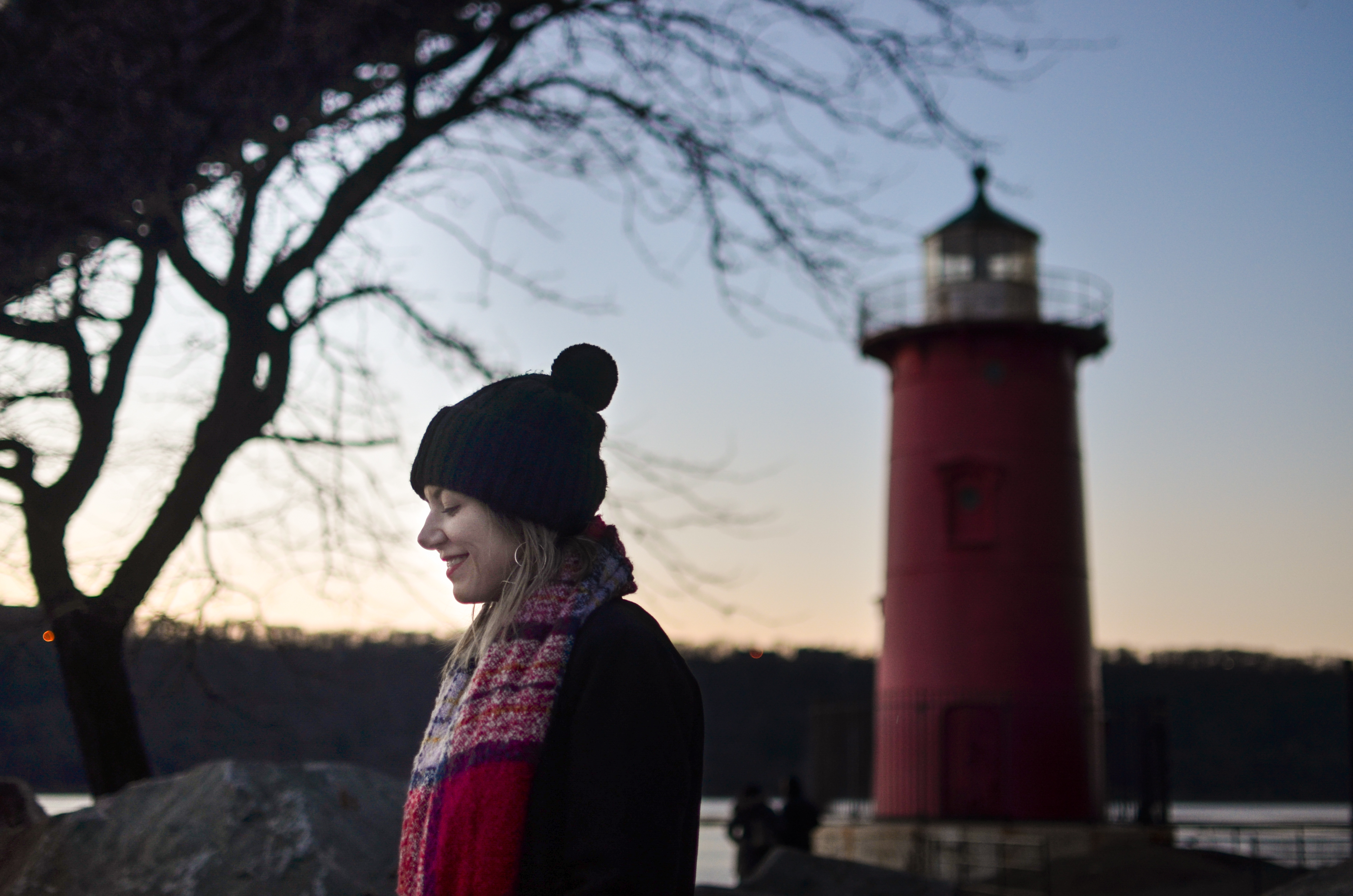 I’m going to talk about a place that I’ve only known because of a book. Some time ago, Thiago bought a book called The 50 Greatest Photo Opportunities in New York City

– ant the name speaks for itself. There are several ideas for photos, in famous places – and others not so much. The coolest thing of all is that the author gives the instructions on how to get to the places and also the setting he used to make the photos from the book. We always like to buy books like that, because we get to know about places we have not heard about it. And it was through this book that we discovered the Little Red Lighthouse, or, the only Manhattan lighthouse. 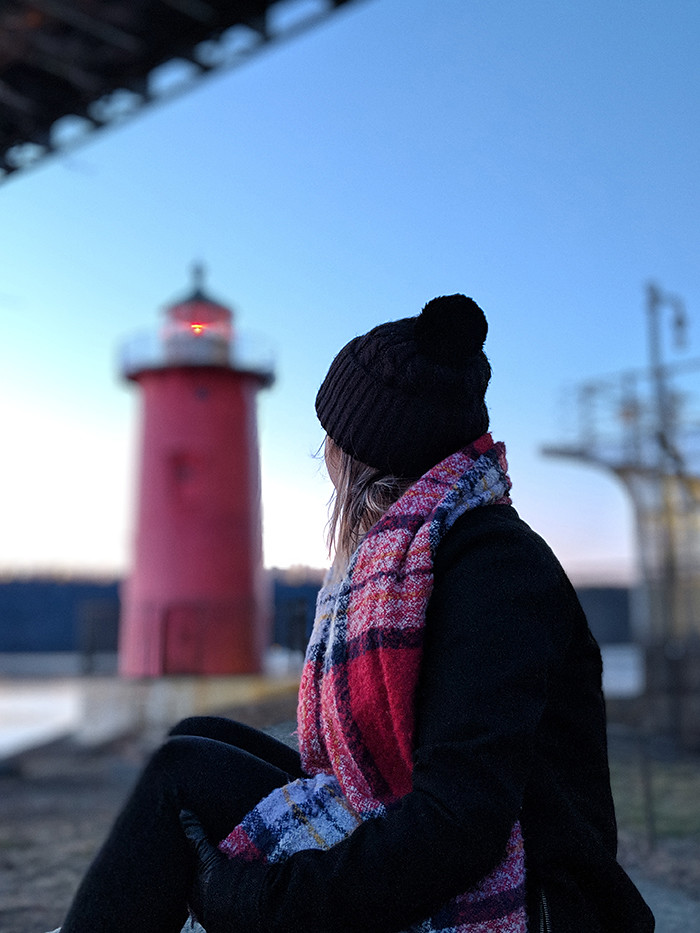 In the early 20th century, barge captains carrying goods up and down the Hudson demanded a brighter beacon. The Little Red Lighthouse had been erected on Sandy Hook, New Jersey in 1880, where it used a 1,000 pound fog signal and flashing red light to guide ships through the night. It became obsolete and was dismantled in 1917. In 1921, the U.S. Coast Guard reconstructed this lighthouse on Jeffrey’s Hook in an attempt to improve navigational aids on the Hudson River. Run by a part-time keeper and furnished with a battery-powered lamp and a fog bell, the lighthouse, then known as Jeffrey’s Hook Lighthouse, was an important guide to river travelers for ten years. The George Washington Bridge opened in 1931, and the brighter lights of the bridge again made the lighthouse obsolete.  In 1948, the Coast Guard decommissioned the lighthouse, and its lamp was extinguished. 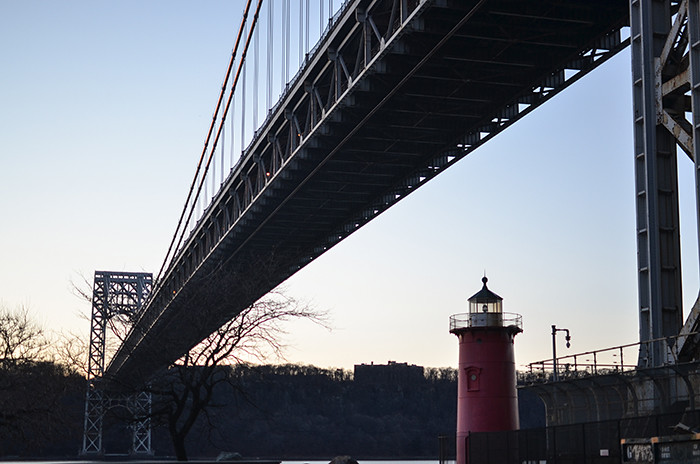 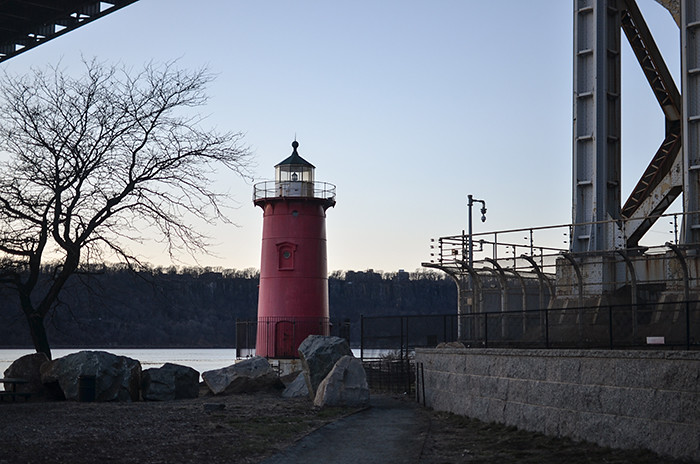 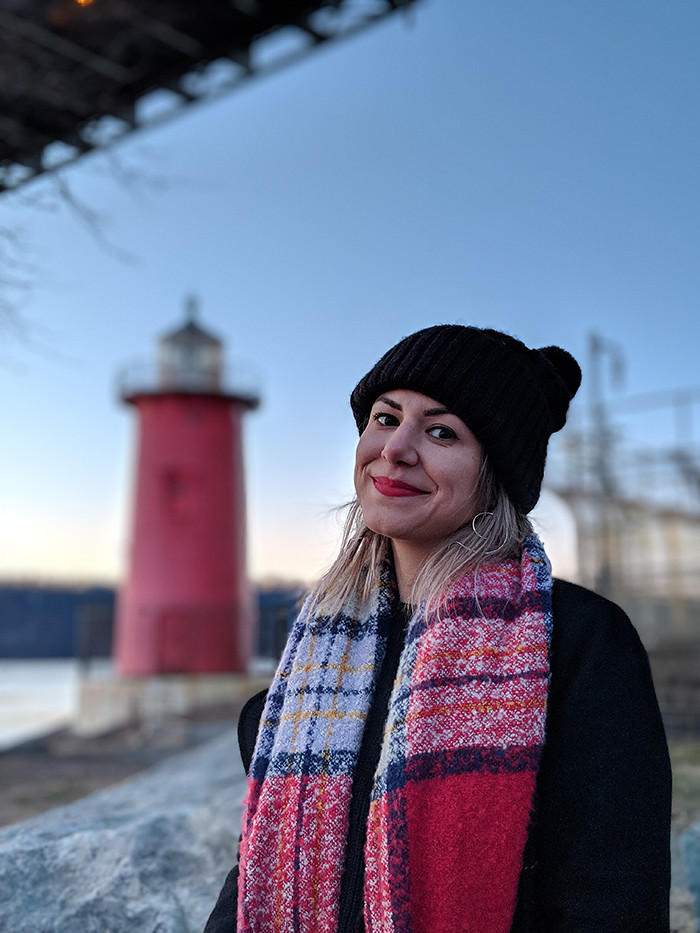 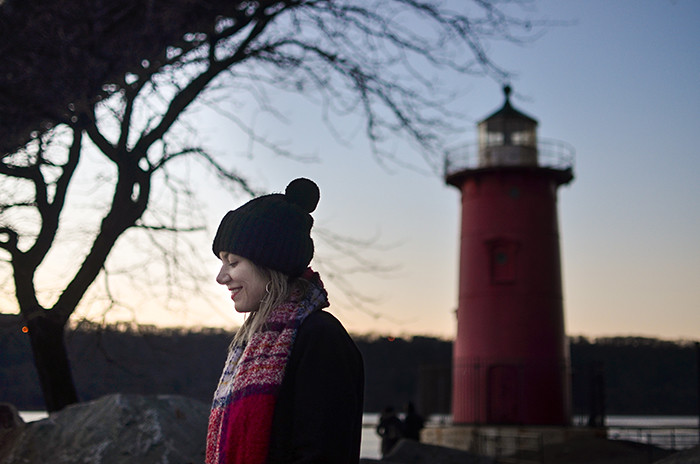 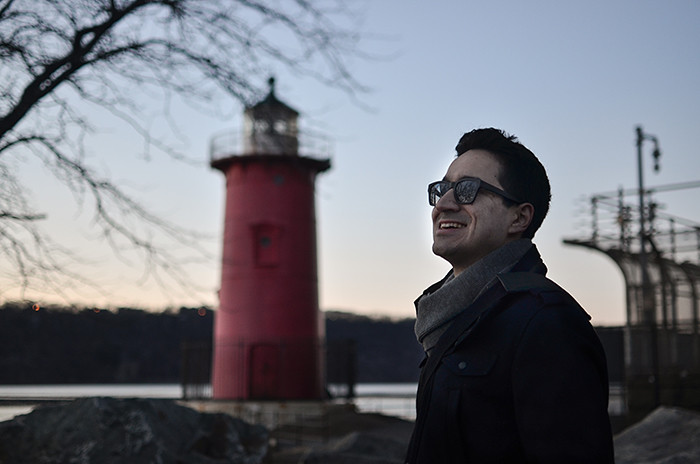 The Coast Guard planned to auction off the lighthouse, but an outpouring of support for the beacon helped save it. The outcry from the public was prompted by the children’s book, The Little Red Lighthouse and the Great Gray Bridge, written by Hildegarde Swift and Lynd Ward in 1942. In the popular book, the Little Red Lighthouse is happy and content until a great bridge is built over it. In the end, the lighthouse learns that it still has an important job to do and that there is still a place in the world for an old lighthouse. The classic tale captured the imaginations of children and adults, many of whom wrote letters and sent money to help save the icon from the auction block. On July 23, 1951, the Coast Guard gave the property to NYC Parks, and on May 29, 1979, the Little Red Lighthouse was added to the National Register of Historic Places. It did not receive much attention over the years until City Comptroller Harrison J. Goldin worked with Parks Commissioner Henry J. Stern to find funding for its restoration. In 1986, NYC Parks hosted a party in honor of the lighthouse’s 65th anniversary and to celebrate a renovation of the lighthouse that included reconstruction of the concrete foundation and installation of new steel doors. In 2000, the lighthouse received a fresh coat of red paint that was true to its original, historic color, along with new interior lighting and electric lines. Today, the Little Red Lighthouse remains a stalwart symbol of the area’s heritage, lighting the way into the city’s past. 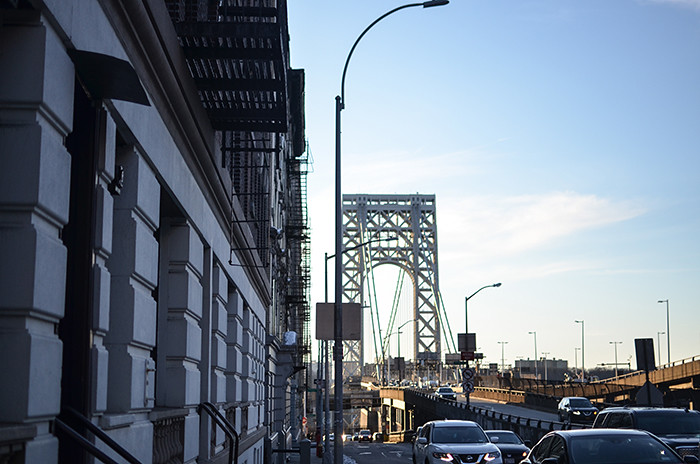 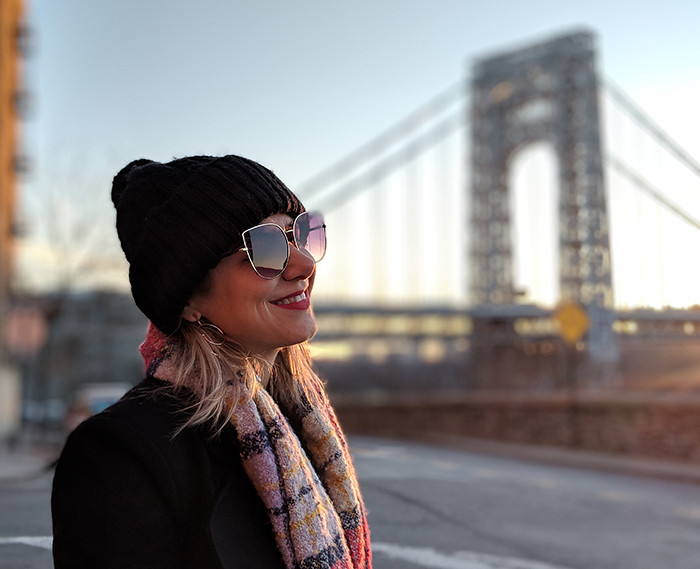 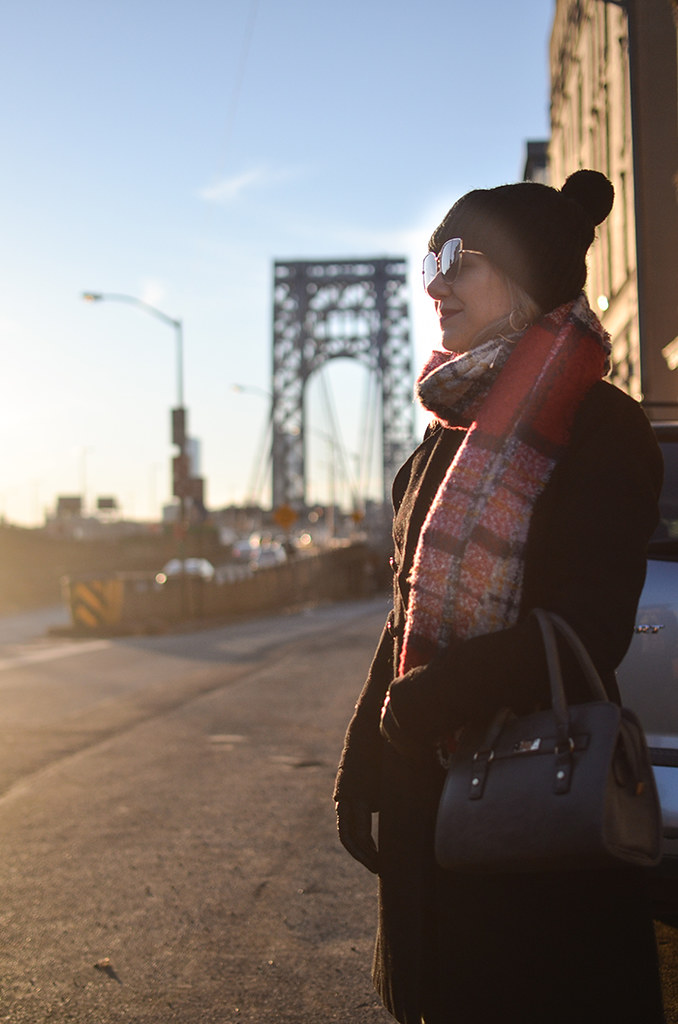 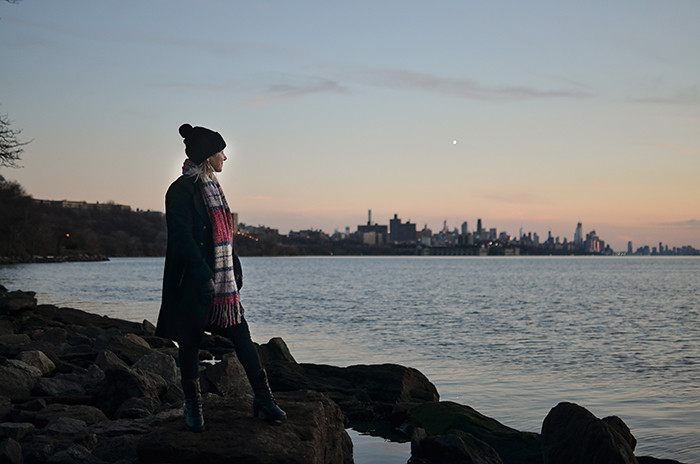 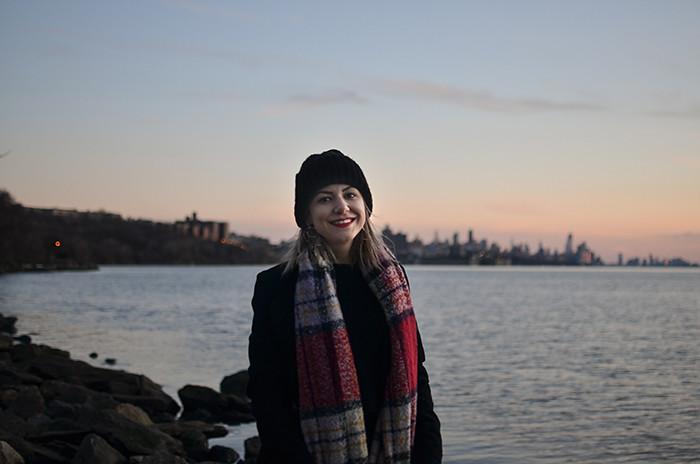 Getting to the lighthouse was easier than we imagined, and as a bonus, we still contemplated several wonderful views of the George Washington Bridge, the bridge that is above the lighthouse. It is located in the north of Manhattan and is one of the bridges that connect New York to New Jersey. I had only crossed that bridge a few times by car, and seeing her close up was breathtaking. I think I already mentioned here on the blog about my love for suspension bridges, and this one has entered the list of favorite bridges. The area where the lighthouse is located is called Fort Washington Park, and there is space to walk, run, ride a bike and have a picnic. The place itself where the lighthouse is located is right by the river, and down the rocks, you will have a wonderful view of the city skyline – remember that this region is well north of Manhattan. Wonderful! 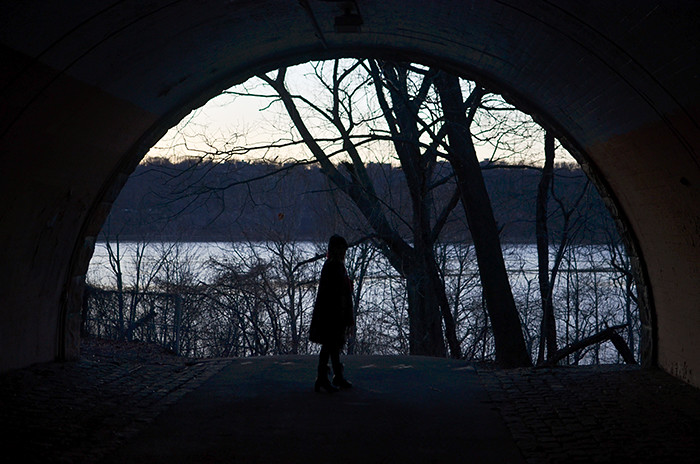 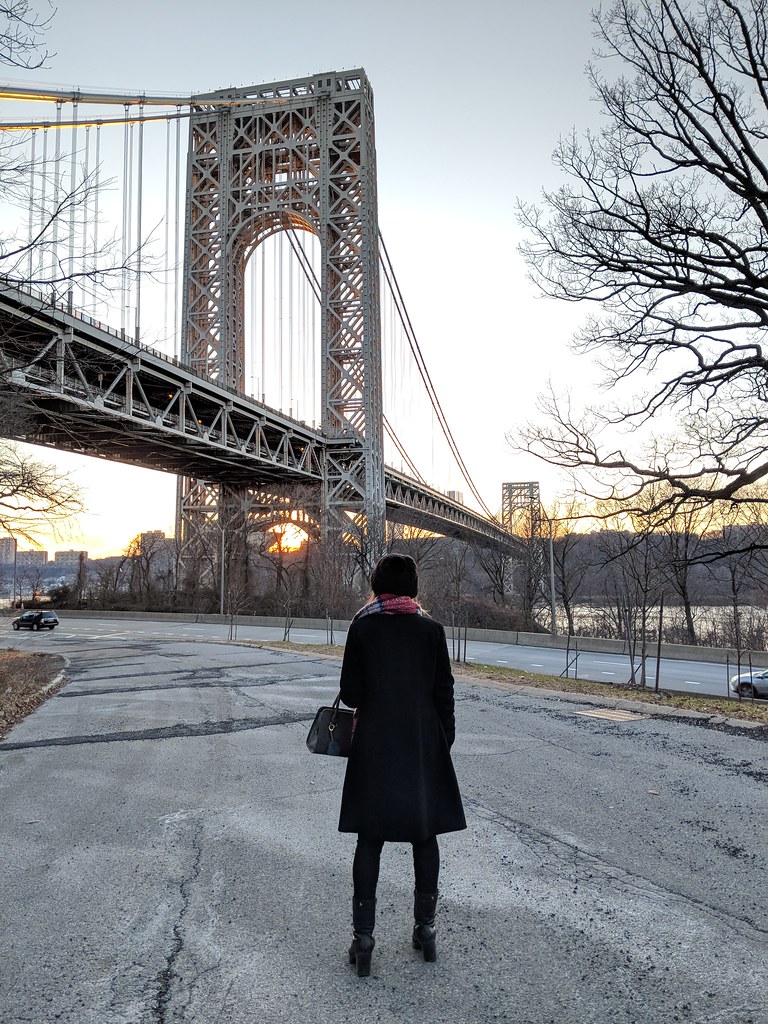 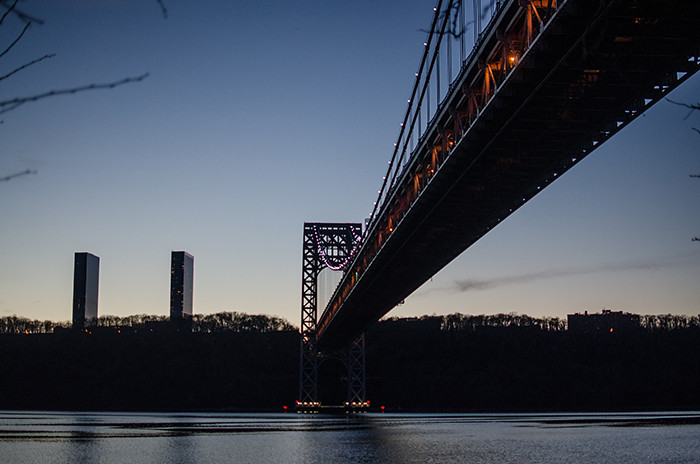 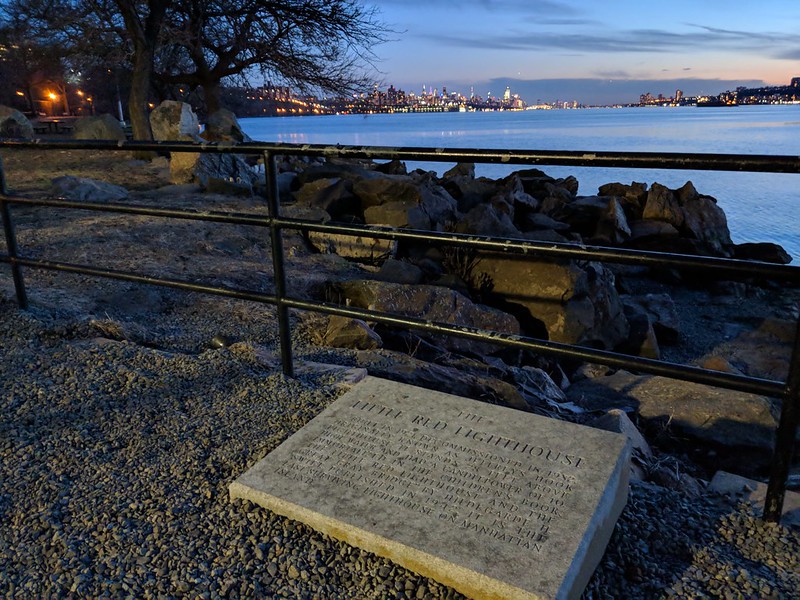 How to get there? By subway, use line A and go to 181th Station. Leaving the station, you walk west on 181th Street. You will arrive on a highway and, looking to the right, you will see a pedestrian crossing over this highway. Before that, be sure to enjoy the beautiful view of the bridge! When crossing the pedestrian path, follow the path, towards the bridge. You will find more wonderful views and also go through a tunnel. Keep walking and enjoying the view – it will not be long before you spot the lighthouse. Seriously, it’s very easy to get there. I also suggest putting “Little Red Lighthouse” on Google Maps – it showed us the right way!

Bônus: during the warmer months, there are guided tours of the lighthouse. You can click here to check the tours scheduled for this year.