10 things to do with kids in New York City 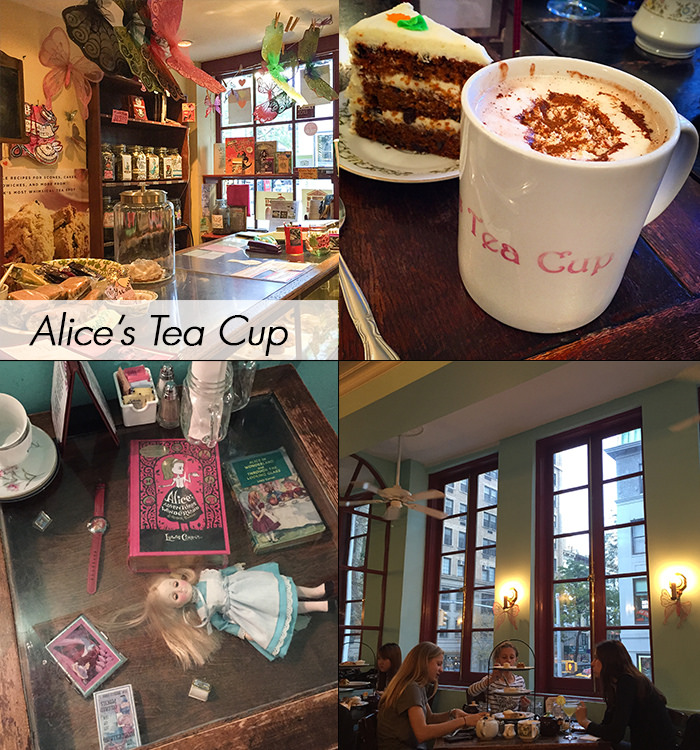 Perhaps many people can not relate children to New York City – after all, Disney at Orlando should be the first destination that pass through the head of those who will travel with the little ones. But even though New York is a very busy city with lots of nightlife, many shopping, many programs for adults – there is also a plenty of programs for children. So, if you are planning to travel with your kids over here, I suggest to read this guide I prepared! 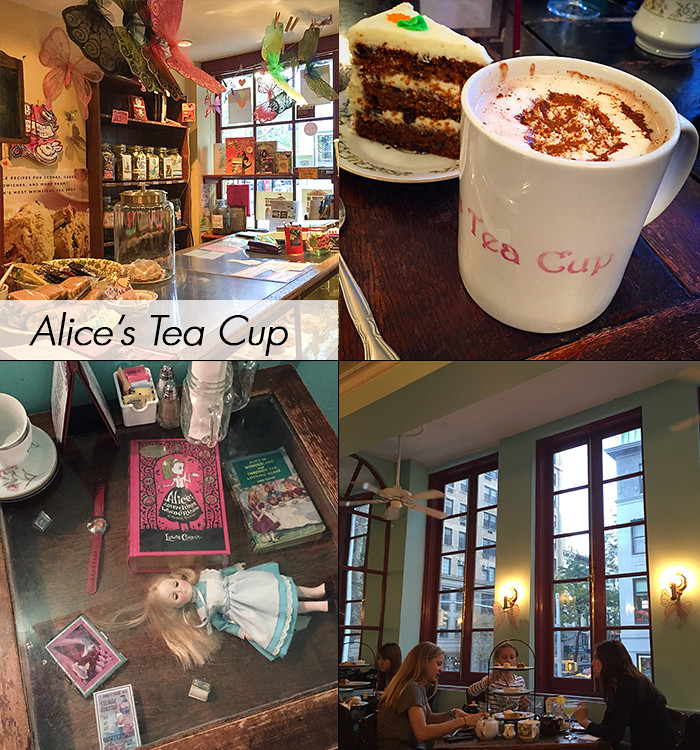 Alice’s Tea Cup – Alice’s Tea Cup is one of my favorite places in New York. It is all inspired by Alice in Wonderland and the decor is very cute. There is three locations in the city: two in the Upper East Side and one in the Upper West Side. The menu includes delights that kids will surely love: hot chocolate, pies and desserts, and special kids options. 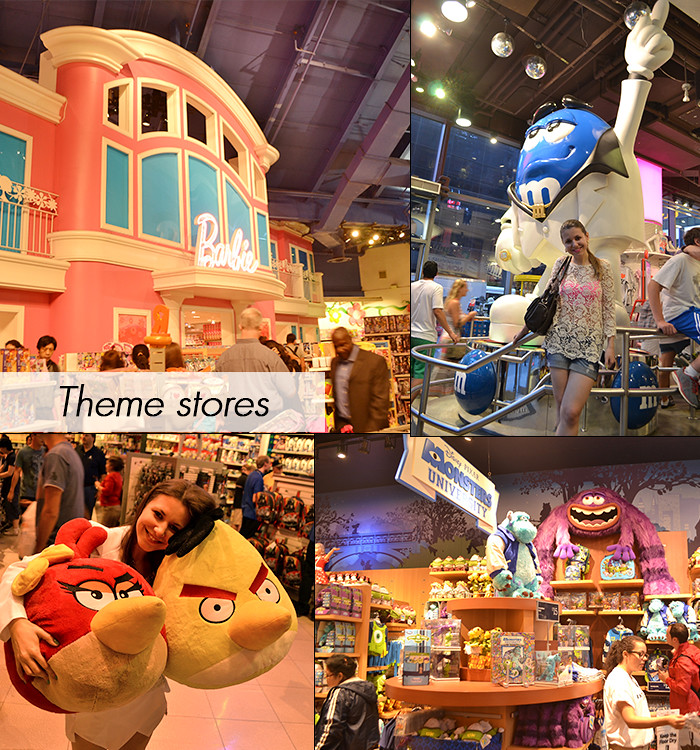 Theme stores – New York city is a shopping paradise for adultos, but kids can also enjoy this commercial potential with stores that are really cool attractions.  There is a lot of theme stores in the city – and it doesn’t mean that you have to spend money. Decor and attractions will make kids really happy. Check out:

Toy R Us – At Times Square, it is a huge store with a T-Rex and a Wheel. Remember: this store is gonna close in January 2016.
Address: 1514 Broadaway

M&M’s World –  a place dedicated to M&M’S, where the coloured chocolate candies have life.
Address: 1600 Broadway

Disney Store – you don’t need to go to Orlando to see Disney atmosphere. This store at Times Square is amazing and charming – it has a princess castle!
Address: 1540 Broadway

American Girl Place – to find customized dolls, doll clothes, accessories and even clothes for children equal to those of the dolls. The site also has a restaurant.
Address: 609 5th Ave 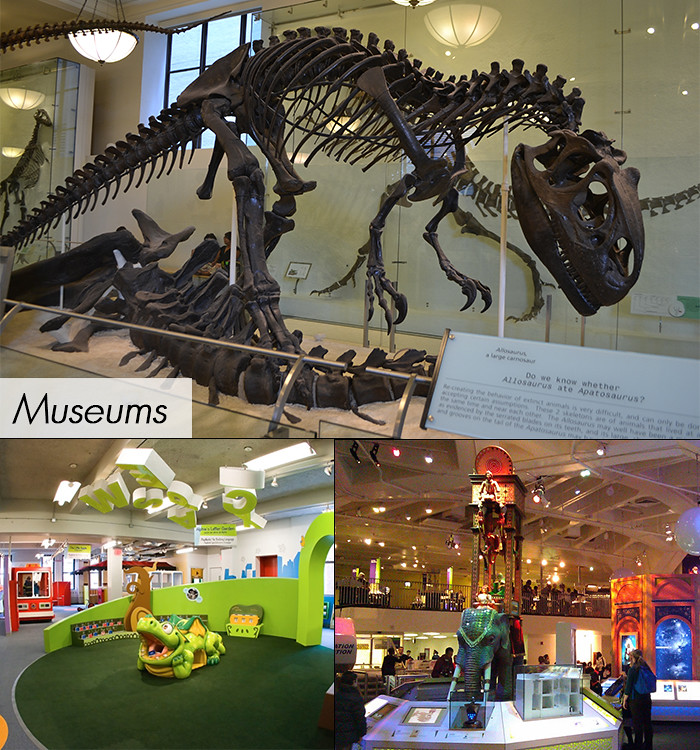 Museums – in this regard, New York is amazing. There are many, many choices of museums in the city and there are some who will let the kids ecstatic. Here are some options:

American Museum of Natural History  – immortalized in the movie “Night at the Museum”, this museum is one of the most famous tourist attractions of the city and get an audience of more than 4 million visitors a year. The collection includes about 32 million of items that tell the story of plants and animals on the planet. Dinosaurs section is cool!
Admission: $22, but you pay what you wish.
Address: Central Park West at 79th Street.

New York Hall of Science – It has 450 exhibits, demonstrations, workshops and participatory activities that explain science, technology, engineering and mathematics. The place provides an educational experience where you can kill your curiosity and stimulate your creativity. The NYSCI was founded in 1964-1965 and turned into interactive science center in New York, which receives half a million students, teachers and families each year.
Admission: U$15 and free on Fridays, from 2pm to 5pm, and on Sundays, from 10am to 11am.
Address: 47-01 111th St., Corona, Queens.

Children’s Museum – the Children’s Museum of Manhattan is a non-profit organization, founded in 1973. It is a fully interactive space and the children learn through playing. The exhibitions involve issues such as universe, the human body, the animal kingdom and technology.
Admission: U$12 (free for kids under 12 months)
Address: The Tisch Building, 212 West 83rd Street.

Discovery Times Square – the highlight here is due to the different exhibitions. Now, for example, is rolling an exhibition of the film “The Hunger Games” and “Star Wars.”
Admission: U$20 a U$27.
Address: 226 West 44th Street.

Sony Wonder Technology Lab – It is the museum of Sony technology. Visitors are invited to experience the very latest in communications technology, providing various equipment. The experience includes making an ID card to earn a diploma at the end.
Admission: free.
Address:  56th Street and Madison Avenue. 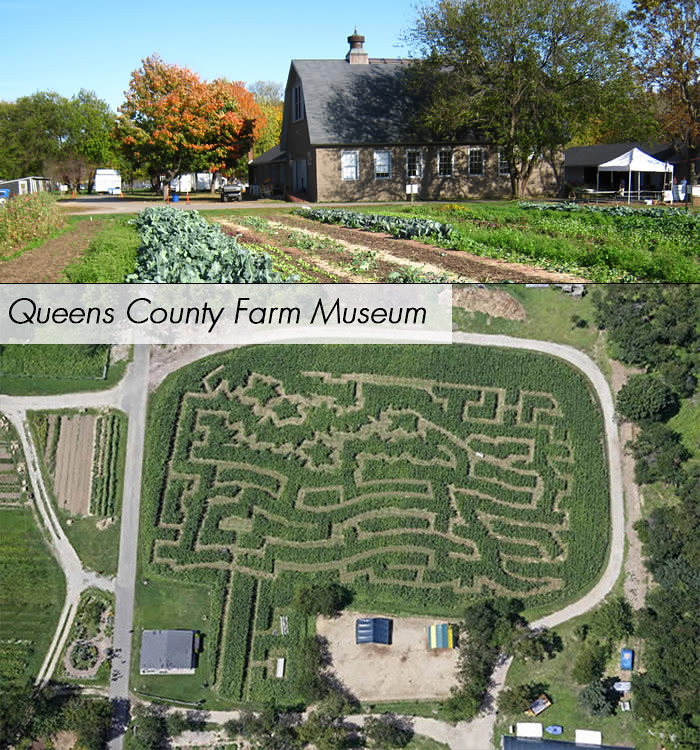 Queens County Farm Museum – the farm from 1697 occupies the largest area of land “free” of New York City. It has 47 hectares and has old buildings, vehicles and farm implements, planting fields, an orchard and a herb garden, beyond the farm animals. In addition to the adventure, you can buy vegetables, wine and meat – the same that are sold on Fridays at Union Square.
Admission: gratuita.
Address: 73-50 Little Neck Pkwy, Queens. 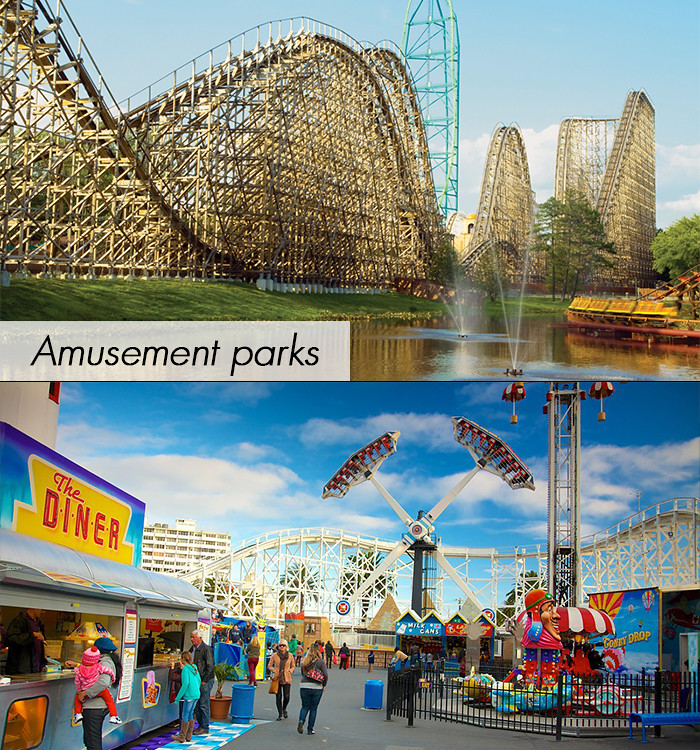 Amusement parks – what kid doesn’t like an amusement park, right? Who comes to New York has two options. The nearest is in Coney Island, Brooklyn – and I have already put a video on the blog. There are Luna Park and Deno’s Wonder Wheel. Both have thrilling rides and other “lighter” attractions. Another park is Six Flags, located in New Jersey, and is perhaps only suitable for the older ones, because it has quite radical attractions. But those are seasonal attractions – Luna Park is open from April to October; Deno’s Wonder Wheel as well; Six Flags is open until January, but only during the weekends in a few months. Click here to check out Six Flags schedule, here to check the schedule and Luna Park and here to check the Deno’s Wonder Wheel schedule. 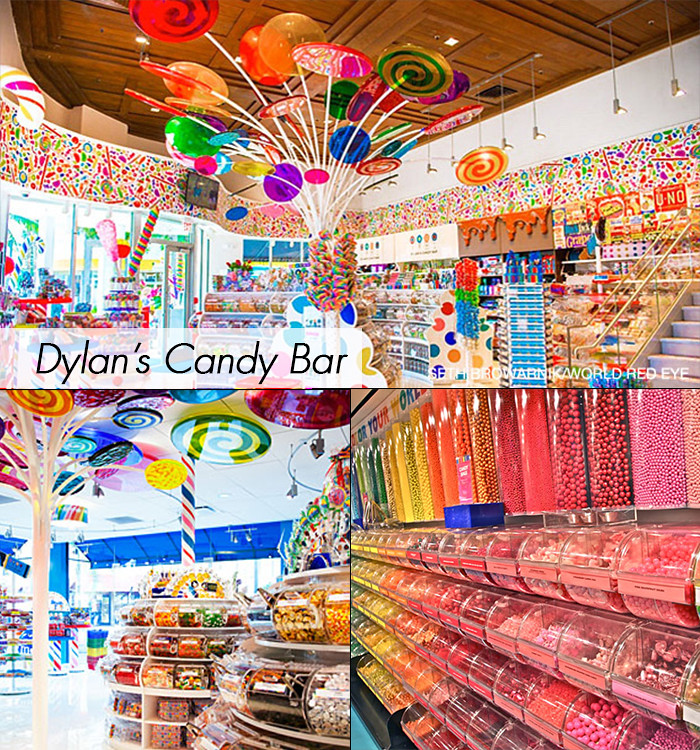 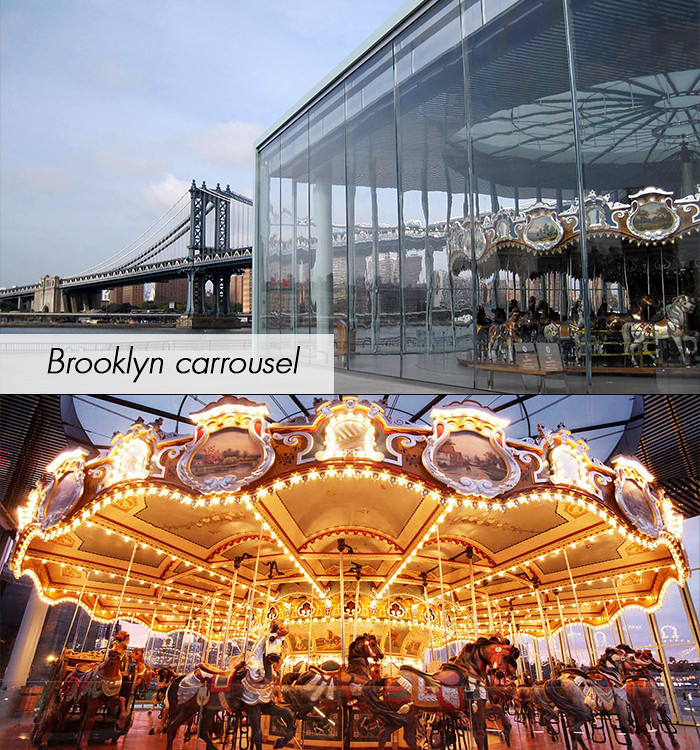 Brooklyn Carrousel – this place is magical. Actually, carousels are magical, right? It has a charming aura and looks that never go out of fashion. This one also has the view to the Brooklyn Bridge and Manhattan Bridge. The whole area of Brooklyn Bridge Park is really cool. Be sure to stop at the Brooklyn Ice Cream Factory for an ice cream 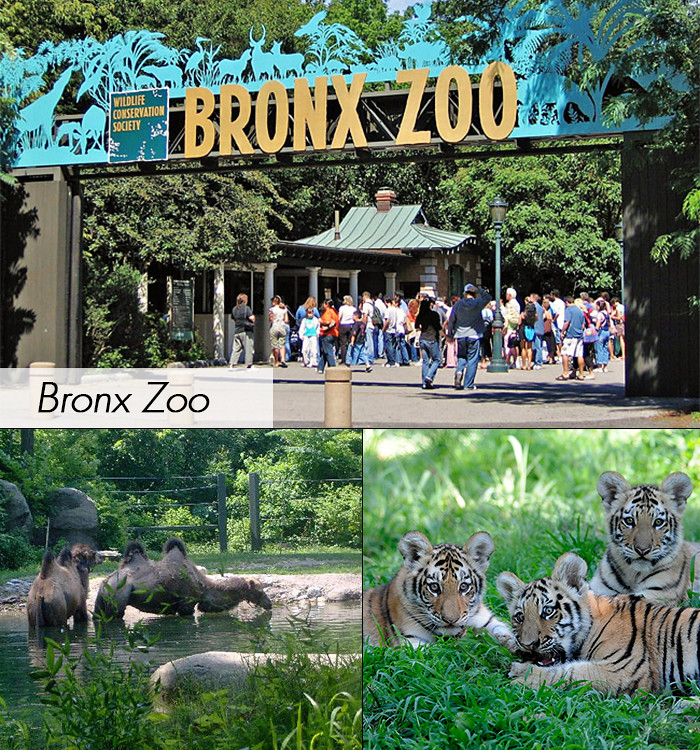 Bronx Zoo – Forget the Central Park Zoo – you will probably be disappointed because the siz, it is small. The best zoo in New York is in the Bronx. It is among the largest metropolitan zoos in the world, and is one of the largest in North America, with about 6,000 animals representing nearly 650 species from around the world. 4 D theater, butterfly garden and special area for children are just some of the special attractions of the place.
Admission: $30 – pay what you wish on Wednesdays, all day.
Address: 2300 Southern Blvd. 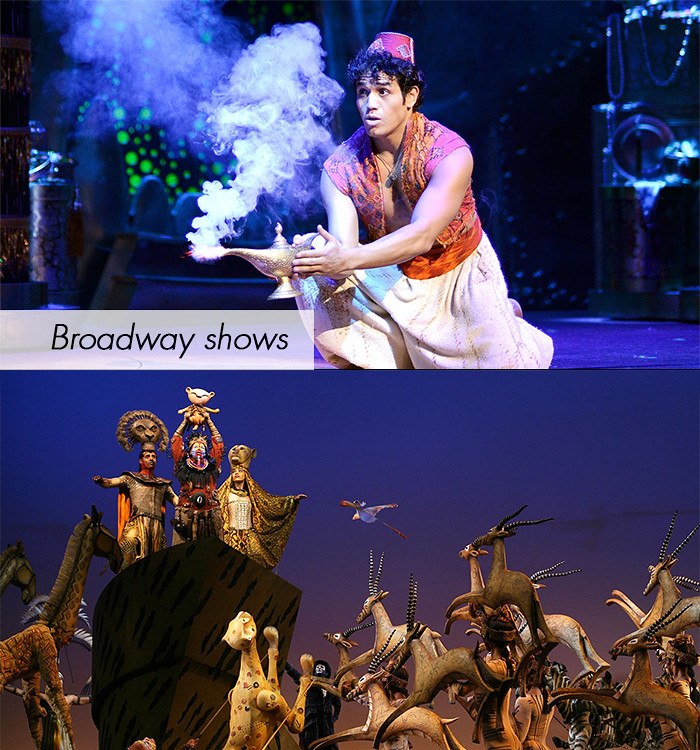 Broadway shows –  a classic of New York City, Broadway shows also reserve good times for the little ones. Pieces like The Lion King and Aladdin, already super popular among children, are also the most famous and disputed. Certainly an unforgettable memory of the trip to New York!

Admission: Tickets can be purchased at the box office of the theater or at TKTS – Behind Times Square stairs. 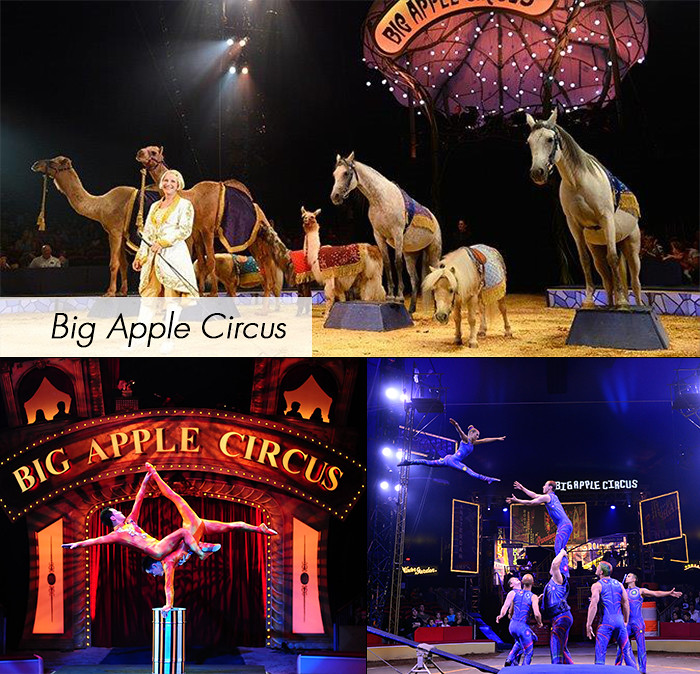 Big Apple Circus –  a circus extravaganza set in the 1920s and featuring acts from the four corners of the globe. Ships, trains, automobiles, and airplanes will serve as the backdrop for breathtaking acts of wonder, accompanied by the seven-piece Big Apple Circus Band playing live at each of more than 100 performances. Acts will include clowns, jugglers, acrobats, and aerialists, from Africa, Asia, Australia, Europe, and North and South America, as well as domestic and rescue animals, all creating performances that will leave audiences smiling and cheering. The show runs 1 hour and 50 minutes including a 20-minute intermission. This is a seasonal program: this year, the presentations started on 10/20 and go up to 01/10.